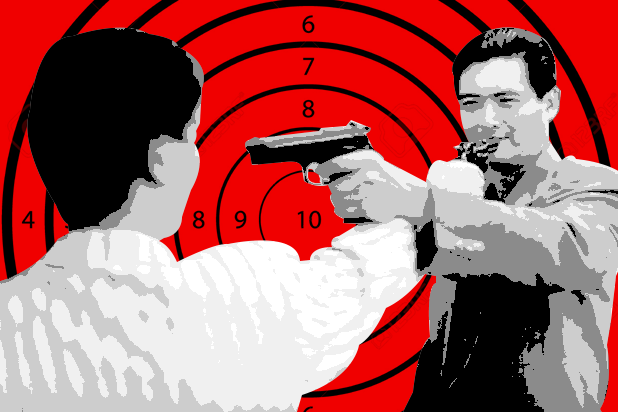 John Woo’s “The Killer” is one of the most influential action films of the last three decades, and as its 30th anniversary approaches, he told a Los Angeles audience Thursday how he staged some of its unforgettable scenes with no script.

“You’re know for making some of the best action sequences of all time,” Hammill said. “Do you storyboard those sequences or do you come up with the shots once you’re on the set?”

“No, I’ve never storyboarded anything in a movie,” Woo said. “You know what? For this, ‘The Killer,’ I even shot without a script. With no script. Just an outline.”

He later added: “The whole movie was in my head.”

Woo explained that he kept his general outline for the film in mind, giving his actors “a very simple idea of a story.”

From there, he envisioned the action. He clarified, as he has many times, that it isn’t inspired by personal experience. (“I’ve never fired a real gun in my life,” Woo said. “I’m a peace lover.)

“Most of the action, I choreograph by myself, because I’m a pretty good dancer,” he said, to more laughter. “An action sequence is like I’m making a dancing scene, or I’m dancing with the actors.”

Woo said he would sometimes surprise his producer by arriving at a location, very early, with only a general idea of what he needed to shoot. He described once asking for “30 stunt guys and 150 extras.”

“And they were asking… Mr Woo, what’s the story about?” he recalled.

But not to worry. Woo would survey the location, put himself in the mind of his actors, and decide what they would do. For the ensuing shootouts, he took his inspiration in part from musicals like “Singing in the Rain” and “Seven Brides for Seven Brothers.”

“The Killer” stars Chow Yun-fat as an assassin who seeks an exit out of the business after he accidentally blinds a singer, played by Sally Yeh. Danny Lee plays a cop who intercedes in unpredictable ways.

Woo plans a remake of “The Killer” starring Lupita Nyong’o.

The original film is regarded as a Hong Kong action classic for its mix of breathless action and relentless style. Along with films like “Hard Boiled,” it earned Woo many opportunities in Hollywood.

“Face/Off” includes several callbacks to “The Killer,” including a confrontation in a church and the frequent use of doves, which Woo says became his visual hallmark after “The Killer.”

Secret Movie Club is presenting an encore presentation of “The Killer” Saturday night — that’s tomorrow — at The Vista at 11:59 p.m. Tickets are available here.