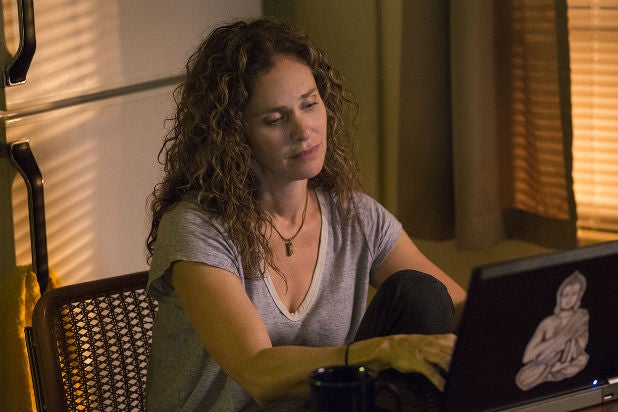 (Spoiler alert: Please do not read on if you have not watched Sunday’s third episode of “The Leftovers,” season two.)

For the bleak, intriguing first season of “The Leftovers,” the great promise of Amy Brenneman went unfulfilled.

When the HBO series cast the prolific TV actress, who counts shows like “Private Practice” and “Judging Amy” among her credits, it was assumed she’d be in the prestige cable trenches with costars Justin Theroux and Liv Tyler — articulating her pain and showing off her acting chops through sweeping monologues and on-screen arguments.

To remain mute is the hallmark of a cult her character Laurie Garvey joins — the Guilty Remnant — after the sudden disappearance of two percent of the world’s population. That disappearance, or “departure,” is still at the heart of season two.

Decidedly more energized, the biggest surprise (or, perhaps, reward) in the new season’s third episode is encountering Brenneman free from the shackles of her cult, talking up a storm and giving us a fully realized Laurie — whose brand of knowing quiet should never have been mistaken for wisdom.

TheWrap caught up with Brenneman to discuss the episode, “Off Ramp,” delight in her new verbal abilities and talk about the coming to roost for her character’s abandoning her family in husband Kevin (Theroux), daughter Jill (Margaret Qualley) and son Tommy (Chris Zylka).

TheWrap: This had to have been a relief, to finally speak on camera?

: You know, it wasn’t that frustrating not to speak. We had a really interesting process last year, even in the stage direction. There was so little for me to go on. [Showrunner] Damon Lindelof and I got this process down.

Did you take the job knowing it would wind up in this place, or did you get to work and it’s like, ‘You don’t have any lines, knock ‘em dead.’

One of the sweetest, creative little moments of this experience was after the read-through of the pilot, we were in New York, and it was hot and Damon said, “Let’s take a walk.” And he and I walked around Central Park and we spun Laurie together.

What did you spin?

Well some of her is the accident of casting. They cast our kids, and Damon said, “I believe you and Justin Theroux could produce Margaret Qualley [the real life child of Andie MacDowell]. But not Chris Zylka. I think Laurie is a bit older than Justin’s character, and had Chris from a previous marriage.

Laurie and Tommy find each other at the end of season one, after your character literally leaves the cult in a fiery blaze. What have you learned about her now that she speaks?

I’m a fucking codependent! Now that I have my son back it I’m pretty much reliant on him and the work we’re trying to do.

Yes, Laurie is writing a book about surviving the Guilty Remnant, but it’s pretty desperate work. It’s clear she feels getting published will validate her choice to leave, not to mention she and Tommy are rescuing current members by going into cult houses undercover.

Yes, the bones of this were there two years ago. Some stuff has gone by the wayside, but she is someone roiling with grief and rage.

It’s got to be hard work, considering how unattractive Chris Zylka is.

Oh my god, there are a few scenes where I’m comforting him or touching him and I remember thinking, “Why do people have muscles and super soft skin?” Like it’s clear he’s muscular, and but he’s just got the softest skin. Then I had to remind myself to be a little more maternal.

TV is so different now, so I’m not sure because of so much content and platform innovation that people remember what a big deal “Judging Amy” was — and one of the first shows with a woman at the lead who could make unpopular decisions.  And you were an executive producer.

Yeah! There wasn’t a template for me. Well, also I had two kids, so I’d be sitting and nursing in the makeup chair sobbing and [“Judging Amy” costar] Tyne Daly would be there getting me through. So I couldn’t have done it without that trailblazer. But it’s exciting to see what people like Kerry Washington and Lena Dunham are doing, with starring and producing.

We talk a lot of about gender in Hollywood here at TheWrap.

You know, I was sitting with Janel Maloney [also on “The Leftovers,” and a broadcast star in her own right thanks to Aaron Sorkin‘s “The West Wing”] and she was talking in that traditional way of, “There aren’t a lot of roles for women.” And she looked at me and said, “You don’t wait for things do you?” I always think I’m going to have to work with a great writer, I don’t wait around. The passivity? The being mad at Hollywood? That isn’t my jam.

What can you tell us about rest of this season of “The Leftovers”?

Not much! That’s up to Damon. I do go away for a while. Carrie [Coon] has an episode. Matt Eccleston and his wife [Maloney] have this extraordinary episode. There’s a coming of full circle. That’s all I can say.