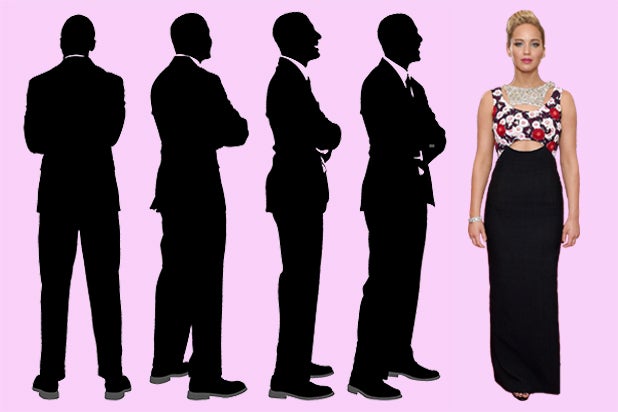 “Across the board at the executive level, it’s at least a 20 percent difference between men and women’s salaries,” said one top female executive at a premium cable network.

Another female producer of Oscar-nominated dramas echoed those numbers, saying “it’s easily 20 or 30 percent. And it’s not just actors and actress’ [salaries].” Producers and directors, she said, also take a gender haircut.

Multiple individuals from film, television and the corporate sector told TheWrap that the Oscar-winning star voiced frustrations held by women in numerous jobs who aren’t compensated nearly as well as their male counterparts.

A female entertainment attorney who brokers deals on behalf of directors, writers and executives said she often feels conflicted when she receives offers for male clients that are significantly higher than those made to females for the same job.

She once addressed the disparity to a movie studio, disclosing that she knew the rates offered to both her male and female clients  — in this case, two directors of the “same level.”

“They were mad at me for raising the question,” said the attorney, who declined to be identified. “The studio said, ‘How can you say that?’ So I said, ‘Well, tell me one reason why you are paying less to her?'” The studio agreed the male director might be paid “too much,” said the attorney.

Fine points in contract negotiations can illustrate how differently genders are compensated in terms beyond cash. In June, actress Zoe Saldana said she struggled to secure childcare as part of her contract for “Star Trek: Beyond” — while her male counterparts were getting high-class perks.

“[Studios] spend more money sometimes ‘perking’ up male superstars in a movie,” Saldana said in June of extras like “a really phat penthouse or them staying in a yacht instead of them staying on land.”

“But then a woman comes in going, ‘OK, I have a child… And you’re going to make me work a lot more hours than I usually would if I was home. Therefore, I would have to pay for this nanny for more hours — so I kind of need that. And they go, ‘Nope, we don’t pay for nannies.'”

The producer said she made less than a male in her position would, she felt “ostracized” by achieving such a rate.

“[In movies] it takes a village,” said the producer. “As a producer, you’re at the top of the food chain, and it was amazing that rather than being accepted… it was because of my sex I was considered very threatening,” she said.

The attorney said too often women demur instead of demanding top dollar.

“Men don’t give up, and women just say, ‘That’s fine,'” the lawyer said, echoing what Lawrence regrets having done when negotiating her back-end profits on “American Hustle.”

“Jeremy Renner, Christian Bale, and Bradley Cooper all fought and succeeded in negotiating powerful deals for themselves,” said Lawrence. “If anything, I’m sure they were commended for being fierce and tactical, while I was busy worrying about coming across as a brat and not getting my fair share,” she wrote.