We’ve finally arrived at a day a lot of folks have been waiting a lot of time for: The day Bioware released a remastered version of the “Mass Effect” trilogy. But it’s not just a remaster: Bioware has promised to fix up the original game, which comes off as pretty archaic next to its sequels.

As part of that extra effort for the first “Mass Effect” — which is mostly about fixing the comical vehicle handling and tuning the gameplay to make it less unpleasant — it got more visual upgrades than the other two games in the bundle. Or, I should say, “upgrades.” Not all the changes were an improvement.

On the most basic levels, the changes are huge. The characters, the environments, the clothes all look significantly better with these high-quality textures. And maybe that’s where they should have stopped, because most of the other stuff they did is frustrating.

First, the lighting. I don’t know why this happens, but it happens pretty frequently. Here’s the first time I encountered this weirdness, with Ambassador Udina.

And for reference, here’s that exact same shot in the original version:

Something about the lighting just doesn’t play nice with the character textures, and so you’ll see more than a handful of conversation scenes where one or more of the characters have this bizarre, washed-out look. But this happens only occasionally, and is something that Bioware will probably fix because there’s no way they meant for that to happen.

Likewise with film grain. Or lack thereof. Like the original game, “Mass Effect Legendary Edition” gives a toggle for a film grain look. The only problem is that it doesn’t appear to actually do anything. As far as I can tell, the film grain effect just isn’t present. This also is likely easily fixable.

The other visual issues are more likely to be permanent, and are thus more frustrating. These issues aren’t bugs, but rather an intentional change in the game’s art direction. “Mass Effect” originally had a pretty uniform visual style, but the new remaster swaps that for what appears to be visual filters that are tailored for each location. 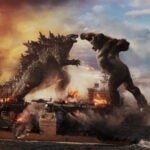 Also Read:
The 13 Most Insane Parts of ‘Godzilla Vs Kong’

If you’re not a “Mass Effect” obsessive, it would be easy not to realize these filters are actually a change, but for me it was immediately noticeable, and irritating. For the sake of argument, though, I’ll give you a few examples. We’ll start with the location with what I think is the biggest change: Feros.

What it looks like to me is they just slapped a brown filter on the whole planet, and probably tossed in some extra dust in the air for effect. I don’t think it looks ugly at all — I even remarked to a colleague that I think it looked really cool — but it’s undeniably very different from what Feros looked like for the past 14 years.

The Citadel, meanwhile, is a bit more subtle. But still a very different vibe.

Each place does something like this, with a unique visual style tailored to the location that is absolutely different from what we got before. It’s very annoying to me because you can’t actually call these filters “improvements.” No, these are simply changes. Feros doesn’t not look better now that it’s more brown — it just looks different. And the Citadel and Normandy don’t look better because they’re much brighter — it just looks different.

And, in the process, these changes compromise what had been the signature visual style for this game. It no longer really looks like “Mass Effect.” Or at least not the “Mass Effect” I’ve spent so much time with over the past decade and a half.

As I said above, this is why I’m glad I play on PC. The fans will almost certainly figure out a way to fix this before I even have the chance to get used to it. I think if I were playing on a console, I’d be much more annoyed because I’d have no recourse but to just live with it. So fingers crossed that Bioware will add a new toggle that lets the player turn these filters off, for the sake of folks playing on Xbox and PlayStation.