The past few years, Michael J. Fox has played deliciously against type in guest roles on "Rescue Me," "Curb Your Enthusiasm" and "The Good Wife." Now he's back with his first series since exiting "Spin City" due to Parkinson's a dozen years ago, and he has reverted to his lovable onscreen self.

The pilot, which airs Thursday evening on NBC, is the strongest of three episodes the network made available in advance. Here are five things to know about the show based on those early episodes.

1. The show addresses Parkinson's head on.

Fox's TV daughter Eve (Juliette Goglia) jokes about his jerking movements in the opening moments of the pilot, and before long his wife ("Breaking Bad" star Betsy Brandt, in fine comedic form) makes another about his tremors aiding lovemaking. 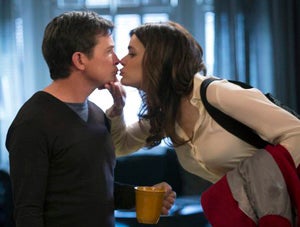 In fact, the entire pilot addresses some of the challenges of returning to work with that disease, from rolling chairs to bosses that want to play it up for "ratings gold." Except on the show, Fox plays Mike Henry, a TV journalist, rather than actor.

"If I did come back it would be for the work, not the exploitation," Fox's Mike tells his former boss Harris (Wendell Pierce) after avowing that he did not want a pity job.

The show less successfully depicts his daughter doing a hackneyed video report comparing her father's disease to "The Grapes of Wrath." Her teacher rightly calls her out on that.

2. Supporting actors bring nice comedic flair to the show.
Brandt and Pierce especially stand out, with Brandt believably playing the loving but bemused wife, and Pierce lightly droll as Henry's ladies man boss. Anne Heche also has fun as a competitive co-worker. But as with Fox, there's only so much they can do with the material. 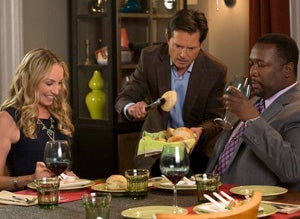 3. Fox's wife makes an appearance.
The actor met Tracy Pollan on "Family Ties," and she appears in the "Neighbors" episode as the super flirty divorcee that moves in upstairs and gets Henry hot and bothered. The less said about those verging on pervy scenes the better.

4. The mockumentary device lives on in "The Michael J. Fox Show."
It's slightly excusable here given Henry's profession as a TV journalist.

5. Warning: There are lessons to be had.
Wouldn't you know it: the family learns the value of dining together by the end of the pilot. And that's just the first of several lightly-dispensed messages to be gleaned from early episodes. If one is so inclined.