“The Sea of Trees” is a movie about guilt and grief that elicits just that in its viewers: guilt and grief. Because for every ephemeral moment to admire in Gus Van Sant‘s latest film, there are about a half-dozen more that make you wonder what went wrong. Like the central character in “My Own Private Idaho,” “Sea of Trees” snaps in and out of consciousness. It’s alternately spirited and narcoleptic.

The film opens with adjunct professor Arthur Brennan (Matthew McConaughey) in an airport purchasing a one-way ticket to Japan’s serene Aokigahara Forest. “Are you checking in any luggage?” the clerk asks. Arthur solemnly responds, “No.” With nothing but a carry-on bag, his azure button-up shirt, a manila trench-coat, and his thin-rimmed spectacles, Arthur leaves home with no plans to return.

Then again, after the death of his wife, Joan (Naomi Watts), there’s not much to return to. Once Arthur arrives at Aokigahara — which is known both as “The Sea of Trees” and as the “Suicide Forest” — his plans to kill himself are interrupted by Takumi (Ken Watanabe), as Arthur attempts to steer an injured and lost Takumi back to civilization. This listless journey back to reality is punctuated by flashbacks of Arthur and Joan, married and out of love. Van Sant decides the most effective way to tell this narrative is by jaggedly toggling back and forth between the past and present. Fun!

Under the direction of DP Kasper Tuxen (“Beginners,” “Hateship Loveship”), the film is indistinguishably beautiful — kind of like a National Geographic documentary celebrating the seven wonders of the world. It’s easy to momentarily marvel at it before inevitably succumbing to boredom. It’s stylistically anonymous, the product of someone in possession of a lovely camera but with no idea where to place it. 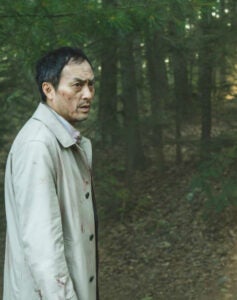 This listlessness could be Tuxen’s doing, but there’s a consistent paucity of creativity in “The Sea of Trees.” The whole movie feels hopelessly unambitious, driven by a cavalcade of clichés. Arthur and Joan’s incessant bickering is passionate, but generic. They harangue one another about their respective misgivings to no end. Joan is an alcoholic; Arthur has been unfaithful. Joan’s real estate business makes her the breadwinner of the house, while Arthur flounders in low-paying academia. But it’s not the quotidian nature of these issues that frustrate. It’s the way in which McConaughey and Watts throw — or rather, don’t throw — themselves into their roles.

Even at the apex of these conversations, where one character begins to cry and the other hurls silverware at the wall (yes, that happens), there’s no spark here. Both of these accomplished actors seem to be reading from a tired script of unhappy, protracted matrimony. The dialogue feels rehearsed, and not in a good way. Clearly both parties are hurting, disappointed both in one another and themselves. We only hurt the ones we love, as the song goes, and Arthur and Joan have done plenty of hurting. Why don’t we care more, then, about their romantic turbulence?

More saddening than our apathy are Van Sant’s directorial choices. Re-watching “My Own Private Idaho,” it’s striking how vivid a portrait he paints of the Pacific Northwest (and points beyond). The characters that inhabit this space (especially the ones played by River Phoenix and Keanu Reeves) are pure and exciting, the fictional creation of someone who has lived a life. With each passing scene you become more entranced. You fear for their well-being, even when they cross the line of law and morality. They’re sympathetic malcontents, youthful nomads in search of familial security, compassion, and understanding.

But I don’t understand the characters in “The Sea of Trees.” I want to, deeply, but any probing into their identities is invariably met with resistance by Van Sant and screenwriter Chris Sparling (“Buried”). Eventually, it becomes clear that it’s not artistic resistance getting in the way — it’s emptiness.

This movie proves we’re miles away from the power of Robin Williams telling Matt Damon‘s troubled prodigy in Van Sant’s “Good Will Hunting” that it’s “not [his] fault,” or something as wonderfully artful as the sex scene in “My Own Private Idaho” (a collection of still images that tell a story of intimacy in seven seconds), or the lingering tracking shots of discontent teens walking the halls of a high school in “Elephant.”

If the past is any indication, a return to form is not out of the cards for Gus Van Sant. “The Sea of Trees” just isn’t it.