Jerry O’Connell, a favorite among daytime TV fans, is nearing a deal to become a full-time co-host on “The Talk,” a person with knowledge of the conversations told TheWrap. He’ll effectively replace Sharon Osbourne, who left the CBS show in March. The deal is expected to be announced imminently.

A second individual told us negotiations between O’Connell and the talk show have been on and off since at least May. CBS declined to comment on this story.

O’Connell, a regular guest on the program, would become the show’s first full-time male co-host. Sheryl Underwood, Amanda Kloots and Elaine Welteroth are the remaining co-hosts on “The Talk.” Carrie Ann Inaba has taken a leave of absence from the series.

Osbourne departed following an on-air spat with colleague Underwood. Since then, TV ratings for “The Talk” have declined — though the show was already in a downward Nielsen spiral this season with Osbourne.

During the March 10 episode, Osbourne came to the defense of longtime friend Piers Morgan after he was criticized for making disparaging comments about Meghan Markle. Some critics, including Underwood, said Morgan’s words were racially motivated (Markle, whose mother is Black, is biracial), leading to an on-air meltdown in which Osbourne said she felt like she was “about to be put in the electric chair” for having a friend others viewed as a racist. 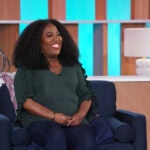