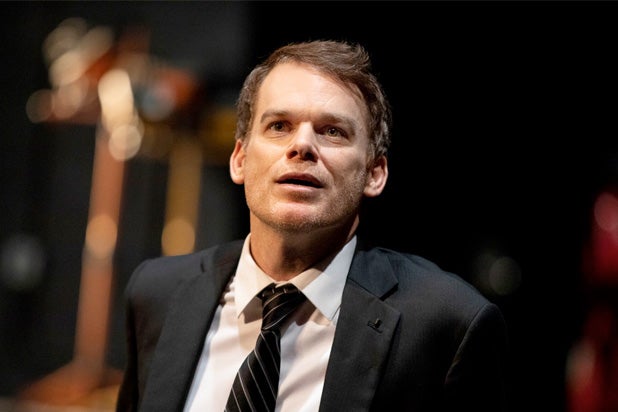 Will Eno’s one-man tour de force “Thom Pain (based on nothing),” now in a thrilling revival at Off Broadway’s Pershing Square Signature Center, reimagines Samuel Beckett as if through the filter of Jerry Seinfeld.

But if Seinfeld’s long-running NBC sitcom was a “show about nothing,” Eno’s 2004 drama is a show about nothingness — a philosophical but funny examination of the human state and our seeming inability to get a firm handle on our all-too-brief experience in the world.

We meet Michael C. Hall’s Thom Pain in darkness, fittingly enough. “How wonderful to see you all,” he says wryly, trying (unsuccessfully) to light a match.

He then launches into several stories — about a young boy in a cowboy outfit who watches a dog get electrocuted, about falling in love with a woman who tells him “You’ve changed” on their first date — but keeps interrupting himself to tumble into various digressions. And digressions on digressions.

The stop-and-start storytelling alternates from the wry to the absurd to the profound, like some kind of existential stand-up act. He jumps from promises of magic tricks with handkerchiefs to silly wordplay (“Love cankers all”) to more philosophical observations about life and love, or as he calls it, “unaloneness at last.”

As Pain, our rambling tour guide through the abyss and bliss of existence, Hall proves a charismatic charmer who ambles about the mostly bare stage dressed in a nondescript, off-the rack dark suit and tie. (Oliver Butler, who directed Rainn Wilson in a Geffen Theatre production in L.A. two years ago, repeats his duties here.)

Hall commands the stage just as he did when he played the M.C. in Broadway’s “Cabaret,” especially when he leaves the stage to wander into the audience, asking questions without actually waiting for (or expecting) answers. In one case, he even lures a theatergoer on stage for a finale that defies all expectations of audience participation.

But he also introduces the sinister energy of the serial killer Dexter Morgan he played for eight seasons on Showtime, as in lines that already have a hint of menace to them: “I am — because of my own pains — going to make someone else suffer, without proportion.”

The suffering here, though, is mostly rhetorical. Because despite the odds, despite the jokey non sequiturs and detours into narrative cul-de-sacs, Hall’s (and Eno’s) Pain never plunges into nihilism as he struts and frets his just-over-an-hour upon the stage. “Keep in mind how little time there is, how little time there always was,” he says in an unexpected affirmation of life. “Then try to be brave. Try to be someone else. Someone better.”