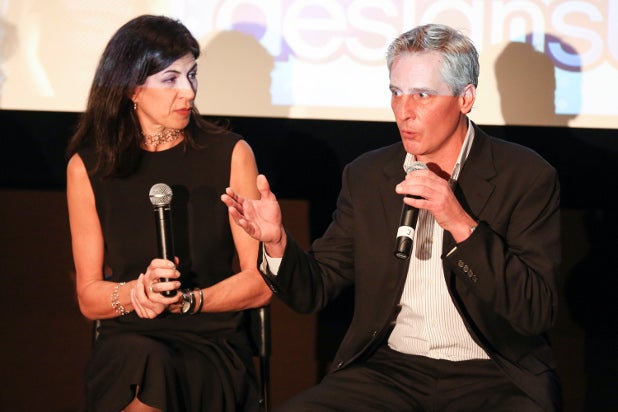 TLC is bringing back its famous home redecorating show “Trading Spaces” for its upcoming season, the network announced Tuesday along with the rest of its upcoming 2017-2018 slate.

“Trading Spaces” ran from 2000 to 2008 and usually depicted two neighbors as they switch houses to redecorate a room in the other’s home with the help of one designer. They had two or three days (depending on the season) and a strict budget to adhere to.

The show is coming back following a resurgence in the home decoration and renovation genre, with hits such as “Flip or Flop,” “House Hunters,” “The Property Brothers,” and more over on HGTV.

“TLC is back into home and property with ‘Nate & Jeremiah By Design,’ our new show helping distressed homeowners turn disasters into dream homes,” TLC President and General Manager Nancy Daniels said in a statement. “We are thrilled to expand in this space, and what better way to do that than to bring back ‘Trading Spaces,’ the series that put property on the map.”

The network also announced a number of new series and specials for its upcoming year. This includes a special on Princess Diana in time for the 20th anniversary of her death, and a four-night event called “This is Life Live,” which follows people as they experience a life-changing event.

Long-running series such as “Kate Plus 8,” “The Little Couple,” “Sister Wives,” and more are also returning.

Here’s the rest of the slate in TLC’s own words:

“90 Day Fiancé: Before the 90 Days”
The newest linear addition to the franchise will follow couples who have an existing relationship online, but have not met in person. Viewers will experience their journey as they travel to the other’s foreign country for the first time in an attempt to establish a relationship.  At the end of the trip, the couple faces a choice: do they continue down a path towards a proposal and engagement to then begin the K-1 visa process, or will one of them be heading home with a broken heart?

“90 Day Fiancé: What Now?” (working title)
For the first time, the hugely successful “90 Day Fiancé” franchise welcomes a brand-new original digital spinoff series. Fans will have the opportunity to catch up with the series’ most popular pairs on TLCgo, the network’s TVE app, as they move on to the next stages of their lives. Each of the seven digital episodes will feature fan-favorite relationships from seasons past, including Melanie and Devar; Matt and Alla; Alan and Kirlyann; Josh and Aleksandra; and Narkiya and Lowo. Viewers watched as each couple endured their first big test, but how will they fare against even more of life’s toughest challenges and biggest decisions?

“Hair Goddess” (working title)
TLC’s exciting new series follows the big business and even bigger personality of Christina Oliva, the epitome of a self-made woman. Born and raised in Staten Island, Christina started her own hair extension company at only 18 years old, working out of her parents’ garage. Within three years, she built a large enough clientele to upgrade to a little Staten Island salon of her own and eventually hire both of her sisters and her cousin to work for her. With the help of her family, Christina’s now world-renowned hair extension empire is ready for the next level: a salon in the heart of Manhattan. Viewers will follow Christina and family as they deal with all the stresses of running a new salon, including the challenges of having a family business while balancing their personal lives

“The Healer”
Charlie Goldsmith is one truly remarkable man. When he was 18 years old, Charlie discovered that he had the power to heal people using his mind and the power of touch. An energy healer like no other and hailing from Melbourne, Australia, this series follows his life and work as he is pursued by celebrities, athletes, and ordinary people hoping to be cured of their ailments. His healing ability is a power that many are skeptical of and he’s gone as far as to seek out scientific and medical experts to help make sense of his gift. Will you become a believer?

“Hear Me, Love Me, See Me” (working title)
Based on the successful international relationship format, this social experiment puts love in hyper-drive by taking physical attraction out of the equation. Each eligible bachelorette will get an unfiltered view into the lives of three single men, using only POV cameras and streaming technology. She’ll see everything they see, and get to talk directly to them – but never see what they look like. At the end of the day, she must decide who has won her heart based solely on personality and emotional chemistry. Only after making her final decision, will she meet all three men face-to-face. Will her eyes follow her heart?

“Meet the Putmans”
Bill and Barb Putman seem like they have an average American family.  They have been married for 34 years, have four great kids and love to spend time with their grandchildren, but their still-growing family does things a little bit differently.  This 25-person family lives under one roof, shares two bathrooms, pools all of their finances, and helps raise all of the kids as one family unit.  Each episode will not only detail the little things that test this large household, but also highlight those extreme “for better or worse” moments they experience as both couples and a family.
“Rattled”
In its second season, this series explores the scary, exhilarating, frustrating, joyful and ultimately life-changing experience of new parenthood as seen through the lives of several couples from across the country. Executive Produced by Flower Films’ Drew Barrymore and Nancy Juvonen, viewers will go along for the ride as they watch these new parents experience a wide range of challenges, triumphs and milestones.  The new season follows five couples including two returning couples from season one: Ashley and Tyson Gardner and their growing quadruplets, and Mars and Doug’s drama-filled relationship.

“Diana: Tragedy or Treason?” (working title)
For the 20th anniversary of Princess Diana’s death, TLC presents the compelling story of a woman who captivated millions with her beauty and her down-to-earth charm, proving she was more than just the wife of a prince. She was both style and substance: a fashion icon, a humanitarian and a fiercely protective mother.She redefined what it meant to be royal – so much so that many feared she would ultimately bring down the monarchy. Diana’s death was a chilling event that sent shock waves across the globe. Was she the unfortunate victim of a tragic accident or was she the assassination target of a treasonous conspiracy? Produced by Jupiter Entertainment, the team behind Investigation Discovery‘s hit “Jonbenet: An American Murder Mystery,” this three-hour global event will detail the theories behind Diana’s death and provide further insight into the princess herself, the movement she created and the world she left behind.

“The Fall” (working title)
TLC presents the story of the rise of world-record-breaking American runner Mary Decker, and of Zola Budd, a South African who was persuaded to adopt British nationality as a teenager to avoid the international sporting boycott of her native land because of apartheid. Budd, famous for running barefoot, and Decker, favored to win gold in the 3,000-meter women’s race at the 1984 Olympics, captivated the world with their stories. This gripping documentary reunites the athletes for the first time to talk openly and honestly about that historic moment of collision at the 1984 Olympics.

“This is Life Live”
This four-night groundbreaking event follows the personal journeys of families about to experience an extraordinary circumstance on LIVE television. Going live from different locations across the country, every episode will share two unique stories of families and their loved ones as they experience an epic, pivotal moment. Every hour reveals compelling and dramatic stories with the twists, turns and huge surprises that happen along the way. From seeing the miracle of a woman walk for the first time and watching a father be reunited with a long-lost family member, to witnessing a deaf parent hearing a child say “I love you,” viewers will share in unforgettable, personal and life-changing moments as they happen LIVE.