In the saga of the death of Variety and the rise of its online replacement, this one will be a marker: Todd McCarthy, the respected film critic who worked for 31 years at the trade paper, is starting his own blog within the IndieWire network.

Noted that the talent is going in one direction: away from print, and to the world of online. (Sorry if this seems self-serving — it just happens to be reality.) 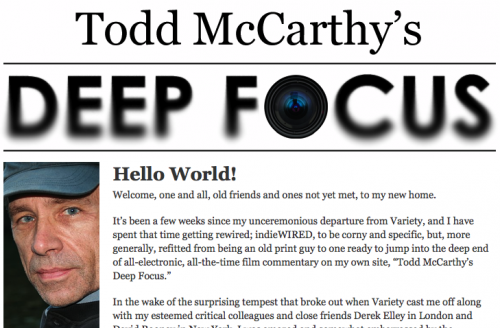 "This came about because we were shocked as everybody was by Variety’s decision to not continue with its critics," Rick Allen, CEO of SnagFilms, which owns IndieWire, told WaxWord. "We thought Todd was extremely important to the ecosystem that we all live in, and we wanted to make sure his voice continued to be heard."

Hollywood was deeply shocked when McCarthy was thrown overboard at the once-venerable trade six weeks ago. Yes, Variety has suffered severe declines in circulation and advertising, and it has gone behind a pay wall, leading to a 40 percent drop in page views, according to the latest analysis.

But still — the consensus in the industry was that Variety had lost sight of its mission, and had quite possibly lost its mind entirely, in dumping someone who was one of the central reasons people still read the trade.

Variety editor TIm Gray went on to explain that despite firing three staff critics — whose reviews often led to uncomfortable situations with advertisers — they would still run freelance reviews. Cool.

Enter IndieWire and CEO Allen, who has smartly scooped up wayward film writers who’ve found themselves without a platform and built them blogs and is selling their ads. He’s done this with Anne Thompson and Leonard Maltin as print squeezes these kinds of writers out — and now he’s doing it with Todd McCarthy. A very smart move, indeed.

McCarthy himself embraced the new world in his inaugural post:

"For 30 years I enjoyed the ‘inside’ aspect of the trade paper format at Variety and from the beginning tried in my reviews to merge the required commercial perspective with serious critical evaluation. With this new site, I will continue writing formal reviews of important new pictures, but the blog aspect will permit me to write about so many other things, from Hollywood personalities I encounter as a matter of course to observations about my son’s progress as a blossoming film buff. In this welcoming column alone, I’m able to write in the first person as I rarely could at Variety, and the possibility to expand the way I write about films and the film world is enormously energizing."

McCarthy will work for himself, with IndieWire selling his ads and sharing the revenue with him. They also promote him on the IndieWire home site, and get to count his traffic as part of theirs.

But how well this system is working is an actual mystery. Allen is very bullish, and says that he and his fellow private investors closed a new round of capital among themselves in December to further grow the business.

But he won’t say how much capital was raised, and he won’t give any detail on traffic figures.

Oddly, IndieWIre hides its traffic now on Quantcast. Allen says that’s because it is counted as part of AOL’s movie traffic, but that still seems rather opaque and unweblike.

His claim that Maltin’s blog is now driving "tremendous traffic" is impossible to quantify, or verify.

But in the meantime, the IndieWire network is growing.

As McCarthy put it:

"I will cover Cannes as I always have, with immediate reviews of as many of the significant titles as possible while allowing four or five hours of sleep a night, but with more, too, based on the encounters I have with people and films. I will attend with equal enthusiasm the new film by Bertrand Tavernier and the restoration of my great old friend Andre de Toth’s 1939 Hungarian picture ‘Two Girls in the Street,’ which I’ve never seen and therefore counts as a new film for me.

"Embarking on this new enterprise feels like taking off for a distant land I’ve never visited before, but where I at least speak the language. I’ll be back with you from Cannes."