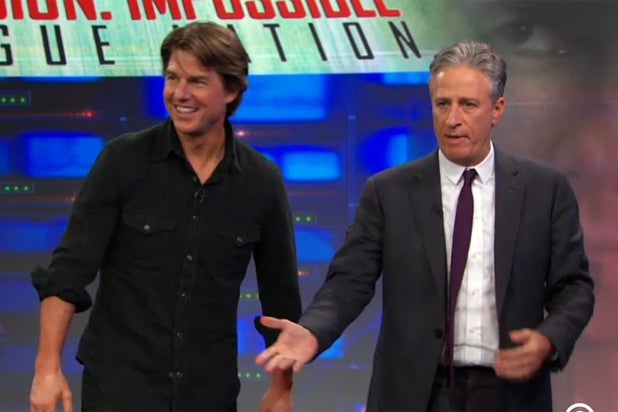 Tom Cruise’s publicity team has forbidden news outlets from asking questions about his personal life and Scientology during his worldwide promotional tour for “Mission: Impossible – Rogue Nation,” an individual with knowledge of the tour told TheWrap.

Cruise’s camp enforced a strict “no personal questions” caveat for access to the star, the individual said.

The ban included any mention of HBO’s explosive Scientology documentary “Going Clear,” as well as tabloid reports that Cruise was dating his assistant.

Cruise’s whirlwind media blitz has included photos calls and red-carpet premieres in Vienna and New York City, as well as a guest appearance on Jon Stewart’s “The Daily Show” and a crowd-pleasing lip-syncing turn on “The Tonight Show With Jimmy Fallon.”

Stewart specifically raised eyebrows with industry insiders for failing to broach the weightier topics in favor of discussing workout routines and Cruise retaining all of his hair at age 53.

“That was definitely not the case for his interview on The Daily Show,” a Comedy Central spokesperson said. “No one put any restrictions on questions Jon could ask him.”

Another individual who worked closely with the actor in 2006 on press and appearances told TheWrap that Cruise has become increasingly silent about Scientology over the past decade, a notable difference from the enthusiasm he displayed at that time.

“Around the third ‘Mission: Impossible’ there were journalists who took Scientology orientations just so they could speak intelligently with Tom about it,” the insider said.

“Going Clear,” directed by Alex Gibney, elicited strong reactions for its accounts of slave labor and abuse for congregants. It also painted Cruise and fellow actor John Travolta as pawns in the Church’s recruitment and public image, orchestrated by the religion’s head David Miscavige.