It should come as no surprise given how generally well-received the Best Picture lineup has been, but the move to 10 nominees will likely continue for another year, Academy president Tom Sherak said on Wednesday.  Some changes, he added, might be made in an attempt to broaden the field.

Speaking in his office after the morning mailing of final Oscar ballots, the first-term AMPAS president said that the Academy was happy with the results of the expanded field … for now. 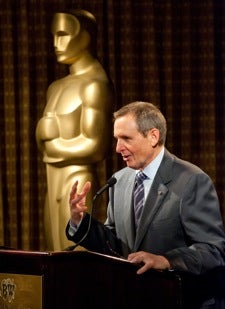 He laughed. “Some people have said, ‘Well, they got lucky.’ I love that comment. In fact, the voters gave us everything we were hoping for when we made the change, except a foreign film or a documentary.”

On that count, Sherak says he’s determined to find a way to get those films into the Best Picture race, and to increase their visibility.

“There are things in the works to address that,” he said. “I don’t know how much I can achieve, but I’m going to keep working on it.”

One key to the Oscar show, he said, is getting viewers “invested in these movies – the big ones and the little ones. So how do you get something from Peru into Des Moines? We have to work on that.”

Sherak also addressed the show itself. Among his notes:

At least, those are the things he’s hoping for. “I’ve got my fingers crossed,” Sherak said, “my legs crossed, my toes crossed … ”