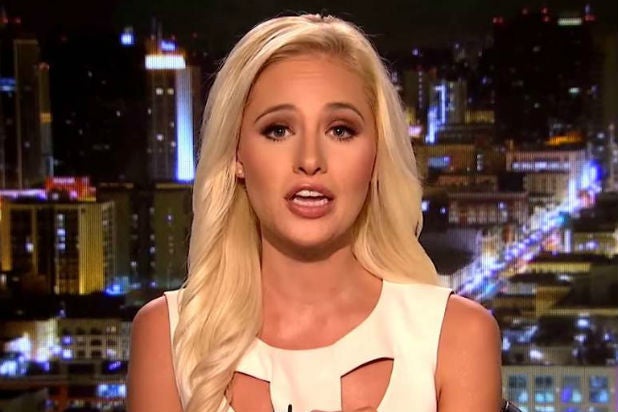 TheBlaze host Tomi Lahren accused YouTube star Shane Dawson of staging a kiss with another man at a Sundance Film Festival event to make a political statement at her expense. Dawson says he was subsequently kicked out for being “not straight.” But everyone’s made peace and event organizers have denied that Dawson’s sexuality has anything to do with the situation.

It all started Monday night at an event Lahren was hosting called “Remind the Nation” that showcased veterans groups, including The Veterans Project. The dispute began when Dawson and a friend approached and asked for a photo with Lahren, a noted young conservative and Donald Trump supporter.

“I was happy to do it. I put my arms around them when all of the sudden they jumped in front on me and started kissing,” Lahren wrote on Facebook. “They were not there to support the event. They were not there to take a photo with me. They were there to instigate and make a spectacle to advance whatever political message they placed above common courtesy for our veteran event.”

Lahren added that such “tricks of the Left” were designed to “instigate and make a scene.”

Dawson had a different take. He said in a series of Snapchat videos that he was ejected because he is “not straight,” and that his leg was injured as he was thrown out. Some of his fans reposted portions of his videos on Twitter.

Event organizer Jacob Nold issued the following statement to TheWrap: “It has been disheartening dealing with the circumventing stories falsely being shared about last evenings ‘Remind the Nation’ event. Remind the Nation was created to promote Zero Films Production and The Veterans Project, with no political affiliation or agenda in mind. Yes, Tomi Lahren hosted our event. Although, she was not involved nor the reason for ‪Shane Dawson and his group of friends being removed from the event. They were simply not on the list, and in NO WAY were removed because of sexual orientation. As the co-producer of the event, I personally took the time to ensure Shane was ok, additionally bringing in paramedics to check on his physical state. He politely declined such assistance.”

Initially Dawson placed some of the blame for the situation on Lahren, but he later tweeted at her that he was sorry for involving her.

.@TomiLahren u may have had nothing to do with what security did to me tonight & i really don't want to cause a thing. i'm sorry for (cont)

Lahren accepted his apology, tweeting, “Apology accepted. As I said, you’re welcome on my show anytime. There is no hate here.”

Prior to making up with the YouTube star, Lahren wrote: “Anyone who knows me knows I am a social moderate and have always welcomed the LGBT community to my show. The dialogue has always been open to you as it is to anyone I may disagree with or differ from. It’s sad you didn’t take the opportunity to engage in a meaningful conversation but rather tried to disrupt and derail an event for veterans and service members. … If you had an ounce of dignity you wouldn’t drum up a fake story for attention. Praying for you.”

Lahren, 24, has made a name for herself with segments in which she calls liberals as “snowflakes” and a widely discussed debate with Trevor Noah on “The Daily Show.” Dawson, 28, is a director, author and podcaster with 3.35 million Twitter followers.

In the end, it appears that two people on different ends of the political spectrum decided that love trumps hate. Or at least Twitter fights.