But it’s unlikely that most of them faced the same level of skepticism as Keanu Reeves, who came to Toronto on Tuesday night for the North American premiere of his directorial debut, the Chinese-American co-production “Man of Tai Chi.”

A star whose career took something of an odd turn after the last of the “Matrix” movies a decade ago, Reeves still has something of a slacker aura to him, and it hardly seemed assured that he could take the reins on a martial-arts epic starring Reeves’ longtime friend and “Matrix” stuntman Tiger Chen.

But “Man of Tai Chi” is indeed an epic of sorts, and the raucous Ryerson theater crowd was clearly in a frenzy partly because the director was a movie star who grew up in Toronto, but also because the movie kicks butt (and lots of other body parts as well). 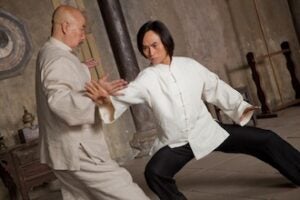 The story of a hapless delivery man who becomes a star by using the “soft” form of Tai Chi as a fighting style, and in the process gets ensnared by a ruthless and sadistic baddie played by Reeves, the movie is a far cry from the tonier premieres downtown at the Princess of Wales and Roy Thomson Hall — but the experience itself wasn’t entirely dissimilar.

Like that movie, this one won’t be mistaken for a deathless masterpiece, and Reeves certainly doesn’t get his acting career back on track with the steely snarling he trots out for his character. But for anybody who can get into martial arts and doesn’t demand a film that will break new ground the way, say, “The Raid: Redemption” did a couple of years ago, this is a rousing show.

And a show is just how Reeves and Chen described it both in brief pre-screening remarks (which the director mostly shouted) and a post-screening Q&A.

Earlier in the day on Tuesday, a very different example of Asian cinema screened for the press the day before its official TIFF debut. Legendary Japanese animator Hayao Miyazaki has said that “The Wind Rises” is the last feature he’ll ever direct — and the film’s Toronto screenings show that he’s going out on a bold and beautiful high note.

Gorgeous, at times as visually impressive as “Gravity,” and undercut with a melancholy and regret that make it far more affecting than the usual animated feature, “The Wind Rises” tells the story of Jiro Horikoshi, who begins the film as a young boy dreaming of becoming a pilot and turns into one of Japan’s top aircraft designers. (Horikoshi is a real person, but significant portions of his life are fictionalized.)

“Airplanes are a beautiful dream,” is a mantra of Jiro’s in the film, and you could use the same phrase to describe the work of a man whose previous films include “Ponyo,” “My Neighbor Totoro” and the Oscar winning “Spirited Away.”

Scenes of aviation, dramatic vistas of Tokyo burning to the ground after a devastating earthquake, and a number of more pastoral sequences are stunning reminders of how visually magnificent Miyazaki’s work can be.

But the key to the film’s emotional resonance is that the “beautiful dreams” line comes as part of a longer quote. The full passage, delivered by a legendary Italian aircraft designer who speaks to Jiro in his dreams: “Airplanes are not tools for war. They are not for making money. Airplanes are beautiful dreams.”

But, of course, in the Japan of the 1920s, ’30s and ’40s, airplanes were tools for war. And that is the knowledge that hangs over and haunts “The Wind Rises” — that our hero’s pure dreams and wonderful skills will lead to death and destruction.

Miyazaki doesn’t dwell on that theme, but he’s too smart and sensitive a filmmaker not to incorporate it. Even if the sheer beauty of the film is what sweeps the audience away — and one of the things that will make it a formidable competitor for any American studio’s animated film at the Oscars — its thematic richness is what cuts deepest and lingers longest.