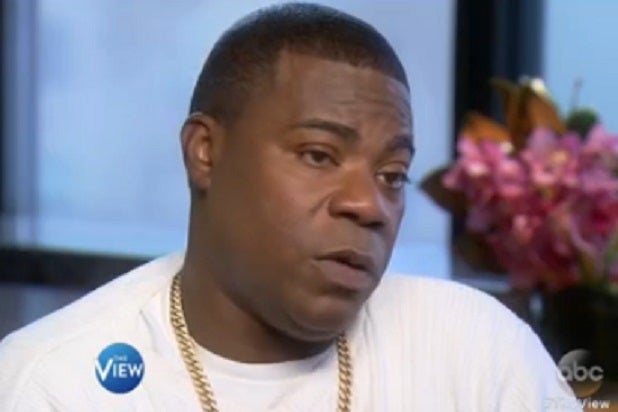 Tracy Morgan will appear on “Barbara Walters Presents: 10 Most Fascinating People 2015” Friday, revealing why he thinks he survived the June 2014 highway wreck in New Jersey that claimed the life of his friend and fellow comedian James McNair.

In a clip shared by Walters during Thursday’s episode of “The View,” Morgan said that he might have been kept alive by the powers that be because of his daughter Maven, born in 2013.

“What do you think the reason is that you survived and your friend did not?” Walters asked Morgan.

Also Read: Tracy Morgan Gets Teary Over Post-Accident Recovery: 'I Wasn't in a Good Place'

“Who knows,” Morgan replied. “Maybe He kept me here to raise my daughter, to raise my family. My new wife.”

Morgan also reflected on the toll that the accident took on his then-fiancee Megan Wollover, whom he married in August of this year.

“Lord knows what it must have been [like] for her to get that phone call at 6 in the morning about her fiance and the father of her child,” Morgan offered. “Lord knows what she went through. And one day she came all the way back to our house to get some fresh clothes, and the phone rang and the nurse said he’s up, and he asked for you.”

During her appearance on “The View,” Walters spoke about the other subjects on this year’s Most Fascinating list, such as current presidential candidate Donald Trump.

“Donald Trump. Is that a surprise? No, I could not leave him out,” Walters said. “And he says that if he loses, his whole campaign — I guess is what I’ll call it — has been a waste of time. It’s a waste of time for him. He’s in it to win it, and that’s it.”

As for who the No. 1 most interesting person might be this year, Walters offered this clue: “It is either a man or a woman. Well, you know, these days it could be a man and a woman.”

The “Most Fascinating People” special airs Thursday at 9:30 p.m. ET on ABC.