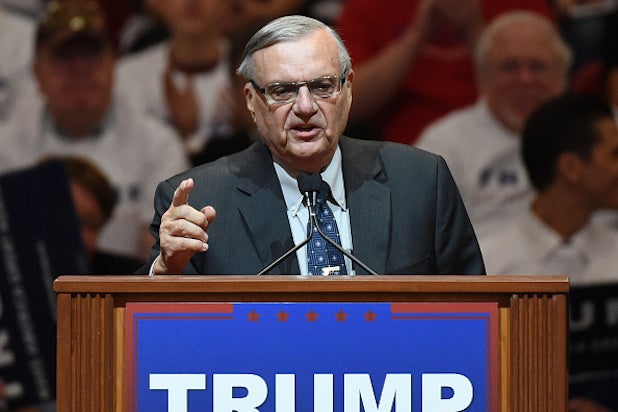 In a statement Friday evening, the White House said that Arpaio, the ex-Maricopa County sheriff, is a “worthy candidate for a presidential pardon.”

Arpaio is known for publicity magnet initiatives such as making jail inmates wear and for his enforcement of Arizona’s hotly disputed immigration law, but he also has TV connections.

In 2011, while a guest on Steven Seagal’s A&E reality show “Lawman,” he used a SWAT tank and other armored vehicles in a residential neighborhood to bust a man accused of cockfighting.

Trump hinted he would pardon Arpaio at a rally in Phoenix earlier this week, telling a boisterous crowd that he wouldn’t do it then because he didn’t want to cause any controversy.

Soon after Trump made his Phoenix remarks, the ACLU objected, tweeting: “President Trump should not pardon Joe Arpaio. #PhoenixRally #noarpaiopardon,” accompanied with a graphic that reads, “No, President Trump. Arpaio was not ‘just doing his job.’ He was violating the Constitution and discriminating against Latinos.”

Here’s the full statement from the White House:

“Today, President Donald J. Trump granted a Presidential pardon to Joe Arpaio, former Sheriff of Maricopa County, Arizona. Arpaio’s life and career, which began at the age of 18 when he enlisted in the military after the outbreak of the Korean War, exemplify selfless public service. After serving in the Army, Arpaio became a police officer in Washington, D.C. and Las Vegas, NV and later served as a Special Agent for the Drug Enforcement Administration (DEA), formerly the Bureau of Narcotics. After 25 years of admirable service, Arpaio went on to lead the DEA’s branch in Arizona.

In 1992, the problems facing his community pulled Arpaio out of retirement to return to law enforcement. He ran and won a campaign to become Sheriff of Maricopa County. Throughout his time as Sheriff, Arpaio continued his life’s work of protecting the public from the scourges of crime and illegal immigration. Sheriff Joe Arpaio is now eighty-five years old, and after more than fifty years of admirable service to our Nation, he is worthy candidate for a Presidential pardon.”