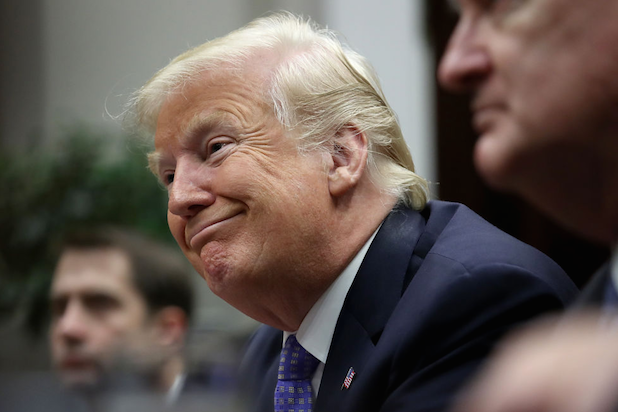 According to Google’s hub for tracking political spending, Trump — via the “Trump Make America Great Again Committee” — has dropped $720,500 on Google ads since the start of June. (The ad tracking tool shares data on spending since May 31 of this year.) As of Wednesday, that makes Trump the second-biggest spender on Google political ads, behind One Nation, the Karl Rove-linked organization that’s supporting Republicans in the 2018 U.S. midterms. As recently as Aug. 16, Trump was leading the pack when it came to Google political marketing.

Nearly all of the president’s Google budget goes towards YouTube, its massive video site.

“Tell Congress: You Want The Wall!” reads on recent YouTube ad. “Do you trust the mainstream media to put the interests of Americans first?” reads another ad, while funneling viewers to a survey on his campaign’s site.

While Trump’s campaign apparently finds Google ads effective, he ripped the company on Tuesday, attacking the search engine for what he said was the unfair promotion of the “fake news media.”

“Google search results for “Trump News” shows only the viewing/reporting of Fake New Media. In other words, they have it RIGGED, for me & others, so that almost all stories & news is BAD. Fake CNN is prominent,” Trump tweeted.

Google pushed back against the president’s tweets, saying in a statement to TheWrap that its “search is not used to set a political agenda and we don’t bias our results toward any political ideology.”

Trump’s spending on Google ads has swiftly declined in recent weeks. After putting about $114,000 into ads during the first week of August, the president’s spending dropped to $44,000 during the third week of the month, according to Google’s tracking tool.

President Trump is Google’s second biggest spender on political ads, but he’s cut down on spending in recent weeks (via Google)

Trump also called out Facebook in his criticism of Silicon Valley on Tuesday, saying “they are really treading on very, very troubled territory and they have to be careful.” But Trump is still ponying up for Facebook ads, too. A recent NYU study showed the president was Facebook’s top political advertiser, spending about $275,000 on ads between May and mid-July.