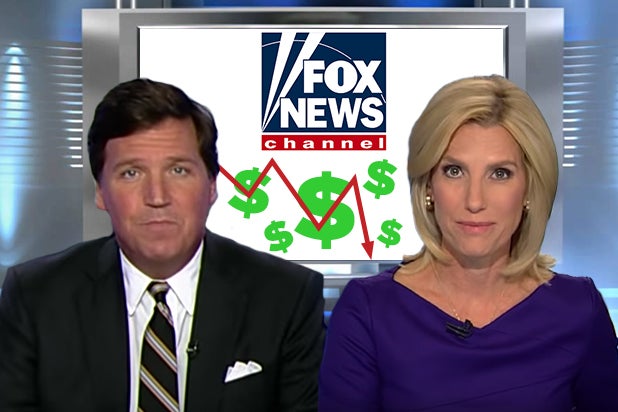 Laura Ingraham’s remarks about Parkland shooting survivor David Hogg and Tucker Carlson’s comments on immigration have come at a heavy cost for their Fox News shows, which have lost millions in ad revenue, according to new data provided to TheWrap.

According to an analysis for TheWrap by advertising data firm Standard Media Index, Fox News’ 10 p.m. slot, hosted by Ingraham, was down at least $16 million in ad revenue in 2018. Carlson’s show, which airs at 8 p.m., has lost another $2.2 million thanks to an ad boycott that began in December after he said mass immigration makes the U.S. “poorer, and dirtier, and more divided.”

That’s a total loss of more than $18 million — though not all of the loss can be blamed directly on the boycotts, for reasons we’ll detail below. The boycotts — fueled by liberal activists — haven’t led to a major financial hit for Fox News so far. The company earned $805 million in ad revenue in 2018, according to Standard Media Index, which uses media companies’ invoices to calculate revenues.

The ad losses have forced  both “The Ingraham Angle” and “Tucker Carlson Tonight” to fill their commercial breaks with unpaid station promos. On Monday evening, Sun Basket Meals became the latest sponsor to pull its ads from the Carlson’s show.

Fox News disputed that it has lost any revenue from the boycotts and said that some advertisers are returning after previously pulling out as sponsors.

“Advertisers have started to return and this period is not representative of the status quo in commercial loads for the industry as virtually every network runs a lighter commercial load during the first two weeks of the year,” Marianne Gambelli, Fox News president of ad sales, told TheWrap in a statement. “No revenue was lost as inventory has been shifted to other dayparts and we are on track to deliver a record year in ad sales.”

While Carlson’s numbers are only for recent weeks, since he made his remarks in mid-December, the Ingraham numbers aren’t just for the “first two weeks of the year” — her troubles began in March 2018.

Here are breakdowns for both shows, based on research conducted by Standard Media Index at the request of TheWrap.

On March 28, 2018, Laura Ingraham mocked Hogg, a Parkland shooting survivor turned gun-control activist, saying in a tweet that he “whines about” being rejected by several colleges. Hogg (who eventually got into Harvard) called for his followers to boycott Ingraham’s advertisers, and at least 27 of them dropped her show.

In late June 2018, Hogg renewed his call for a boycott after Ingraham compared child-detention facilities for refugees along the U.S. border to “summer camps.” Revenues for  the 10 p.m. hour took another big dive in July 2019, dropping $1.7 million, or about 47 percent, from July 2017, according to SMI’s numbers.

While the show did slightly better in the fall, “The Ingraham Angle” has seen double-digit losses compared to the previous year for every month since the boycott began in March.

It’s possible some of the drop-off is attributable to Ingraham being less of a draw than Hannity, one of Fox News‘ most bankable stars. But that doesn’t explain the entire drop-off. 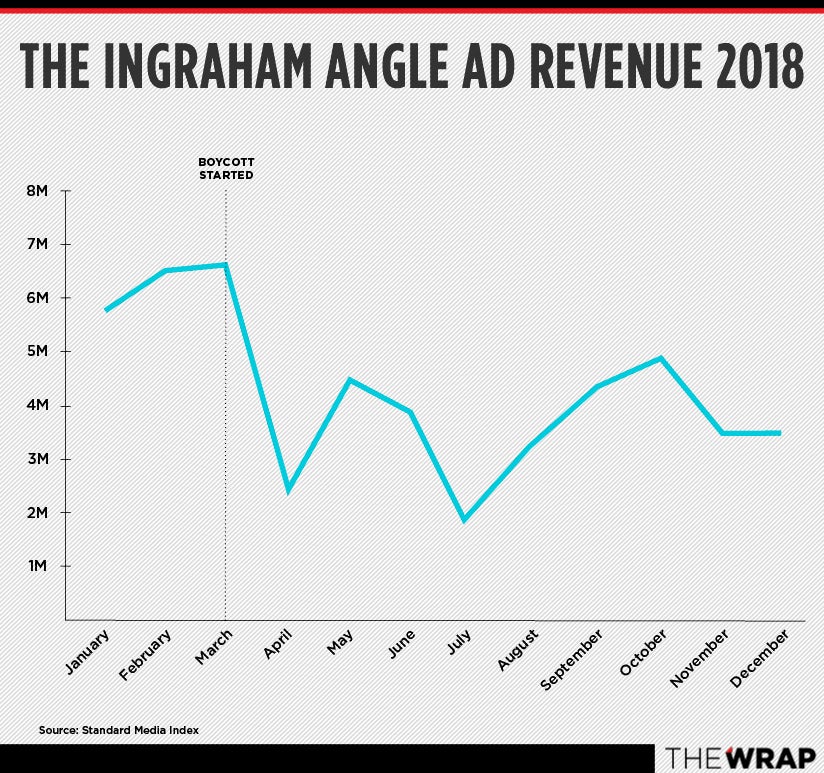 On Thursday, Dec. 13, 2018, Carlson opined about “an endless chain of migrant caravans” making “our own country poorer, and dirtier, and more divided.” On the episode in which he made those remarks, his show pulled in an impressive $493,000 in ad revenue, according to SMI.

But the effects were almost immediate. By the following Tuesday, Carlson’s ad revenue had plummeted to $92,000, according to SMI. Revenues have not completely bounced back: They have ranged between $79,000 and $236,000 a night for the month of December. 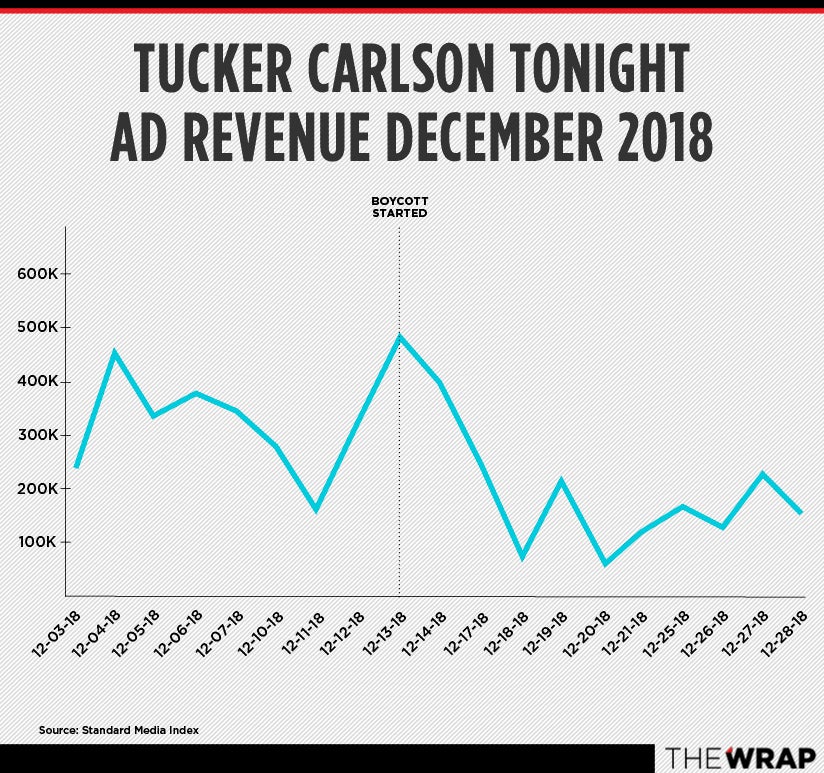 MMFA president Angelo Carusone said that he believed SMI’s calculations of the Carlson and Ingraham ad losses were “extraordinarily conservative.”

“I think they are significantly more devastating than that,” Carusone told TheWrap. “What it doesn’t capture is all the lost business that they would have gotten and what happens to the ad rates going forward.”

Fox News, Carusone said, may be in for a rude awakening in May, when broadcasters gather in New York to preview their programming for the upcoming TV season.

“To me the questions is not so much, ‘What is happening to the prices now?’ But come May, what will happen?” Carusone said. “They’re heading head-first into a buzzsaw.”

Advertiser boycotts such as the ones against Carlson and Ingraham might seem likely to fizzle as anger over incendiary comments starts to dissipate and people move on to the next story.

Ingraham and Carlson have both enjoyed strong ratings despite the sponsor boycotts — but their advertisers have been slow to return.

“Things could be better for Fox News and their advertisers,” Brad Adgate, a former advertising executive and media analyst, told TheWrap. “The revenue for two of their three weeknight primetime shows is down significantly and there is still no turnaround.”

It’s unclear just how much money the network actually lost over the boycotts, as most ad time is purchased well in advance. Fox News also makes a bulk of its profits through licensing fees from cable-system operators.

But Adgate questioned the network’s assertion that it did not lose any money.

“If you’re moving an advertiser from primetime to a lower rated daypart, such as daytime programming, you’re going to need more commercials to make up for the audience guarantee,” he said. “They’re losing money because suddenly they can’t sell the daytime show because they have all these units from primetime, and they can’t sell the inventory in primetime because advertisers don’t want to be on those shows.”

Adgate said the boycotts constituted a “yellow alert, not a red alert,” at least for now.

“It’s not going to be a big blow for them,” a media buyer at a large agency told TheWrap. The individual asked not to be named because he was not authorized to talk to the media. “From a revenue standpoint, it’s really a drop in the bucket for these guys.”

WILL THEY KEEP THEIR JOBS?

The fact that Carlson and Ingraham remain on the air is the most powerful illustration of the company’s commitment to them.

“It’s not great,” Adgate said. “But the fact that advertisers haven’t come back in nine months and they haven’t been fired clearly shows Fox News can deal with that.”

Fox News has repeatedly stood by Ingraham and Carlson, saying it would not allow their voices to be “censored by agenda-driven intimidation efforts from the likes of Moveon.org, Media Matters and Sleeping Giants.”

One argument for keeping them around: ratings.

Viewership in “The Ingraham Angle” actually improved after the boycott, rising in both overall viewers and in the advertiser-coveted 25-54 year-old demographic. Just six weeks after the boycott began, Ingraham netted an average of 2.656 million viewers nightly, with roughly 553,000 in the key demo, up from 2.284 million total and 471,000 demo viewers in the six weeks before the boycott began. Her ratings were slightly down by the end of the year, with 2.518 million total viewers and 467,000 in the demo for the fourth quarter of 2018.