With its power hitters, “Glee” and “American Idol,” at the plate Tuesday night, Fox won the adult 18-49 race for a third consecutive evening, with the former freshman series becoming the top-rated scripted series of the season in the process.

Here’s a look at some of the night’s ratings highlights: 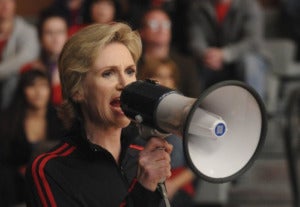 NAVEL (CRIMINAL INVESTIGATIVE SERVICES) GAZING: “NCIS” endured its lowest ratings of the year for CBS, garnering a 3.4 adult demo rating and 15.9 million viewers. Indeed, it hasn’t been a great week for CB S. "NCIS: Los Angeles" actually perked up 7 percent from its last original run (April 6), but at 10 p.m., “The Good Wife” also had its season low with a 2.2 and 12.1 million viewers.

SPEAKING OF 10 O’ClOCK: Going against a fresh episode of “The Good Wife” for the first time in three weeks, NBC’s “Parenthood” dropped 17 percent to a 2.4/7 performance in adults 18-49 and 5.9 million viewers.