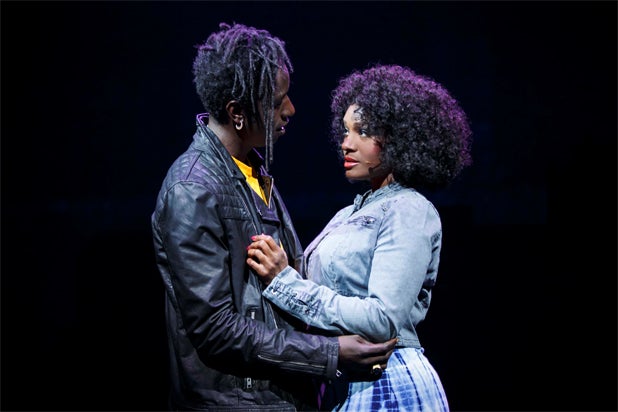 Frankly, I wouldn’t trust any veteran Broadway critic when it comes to a new musical that features the songs of Tupac Shakur. In this case, that musical is “Holler If Ya Hear Me,” which opened Thursday at the Palace Theater.

At the critics’ preview I attended, the show’s heartiest response came from the balcony and not those people seated in the orchestra of the Palace Theatre, which earlier this year housed a revival of “Annie” and before that, “Priscilla Queen of the Desert.” Judy Garland and Liza Minnelli also performed here, and as if to erase all those stodgy memories, the “Holler” producers have introduced stadium seating to the Palace, with the new, radically raked orchestra seats built up over and above the old ones at this vintage theater. It makes for an unsettling entrance into the Palace as you walk by all those empty seats down below.

Equally unsettling is the show that follows about two friends who try to make a valid life for themselves in an urban hell of gun violence. As with the nearby “Rocky,” the best thing about “Holler” is the new seating configuration, which is startlingly effective in giving us a predatory hawk’s eye view of the bleak street scene below. Otherwise, this show keeps falling prey to almost every cliché that has made the jukebox musical such a maligned genre in the theater.

It’s not just that Todd Kreidler’s book can’t match the power of Shakur’s stark and bracing poetry. Kreidler keeps subverting those lyrics with a storyline that makes a contradictory mess of its principal characters. “Holler” is not a travesty like the super-successful “Mamma Mia!,” where only the first line of every Abba song refers to the action at hand and the rest of the lyrics go on their merry, aimless way. But all too often, Shakur’s lyrics only comment on the emotional content of the characters’ lives. As with most jukebox musicals, the lyrics rarely further the action. Which leaves Kreidler’s book with way too much explaining to do.

In one respect, Kreidler’s approach might be too sophisticated for the musical stage. As Shakur’s lyrics make clear, the villain is not one or two bad guys: The real problem is a complicated combo of guns, racism, drugs, welfare gone amok, sexism, absentee dads. That’s possible to convey with spoken poetry, much tougher to do on stage in a musical that’s trying to tell a cogent story.

Later, his friend Vertus (Christopher Jackson), who’s living well on the mean streets, reveals, “I was looking for a father he was gone/I hung around with the Thugs, and even though they sold drugs/They showed a young brother love.”

Also trapped in this life of heroin and “violent robberies” are the men in Vertus’ crew, Nunn (Jahi Kearse) and Darius (Joshua Boone, giving a standout performance). And caught between Vertus and John is their mutual girlfriend, Corinne, played by the strong-voiced Saycon Sengbloh, who suffers from severe character whiplash. Kreidler has Corinne in and out of these two men’s embrace so many times that her character seems to be bent on setting a world record for infidelity. Plenty of musicals have been built around the plight of unfaithful lovers, but usually those characters get a song to explain their actions. Not Corinne, because Shakur never wrote that song.

Character whiplash, in fact, is almost as epidemic in “Holler” as are drugs and gun violence. For example, John takes a job with Griffy, an auto mechanic (Ben Thompson), who tells him that his first week of work is on trainer’s pay. When John receives that salary ($6.50 an hour), he flies into a rage to sing that anthem of angry despair, “Holler If Ya Hear Me,” which ends act one.

OK, but Griffy (who, because he’s white, sings Suzanne Vega’s “Tom’s Diner” on acoustic guitar) quickly turns into act two’s good guy when he gives Vertus a job (even though it’s at the same trainer’s pay) so he can go straight, and soon John is back-talking to both men about their running the garage together. That’s a whole lot of quick shifting, if not heavy lifting, for one book to deliver, none of which is conveyed through song.

Kreidler never introduces the rival crew that kills Vertus’ brother, Benny (Donald Webber Jr.), who is dispensed with so early in the drama that he’s never clearly identified. Again, Kreidler’s approach strives for something beyond easy resolutions: By his keeping Benny’s killers off stage, we don’t peg these “kids” as the villains, since the real problem is much more pervasive. But as drama, “Holler” never turns visceral.

And why is John’s art as a cartoonist, which is a major element in Edward Pierce’s scenic design, dropped in act two?

Kenny Leon, who recently won a Tony for his direction of “A Raisin in the Sun,” hasn’t directed many musicals, and it shows. He might have fashioned a show closer to “American Idiot,” which relied on music and choreography much more than its skimpy book. With “Holler,” there isn’t enough of Wayne Cilento’s energetic choreography, or even Shakur’s songs, to propel a story bogged down in undramatic conflicts.

Then again, don’t trust a Broadway critic. The people in the balcony may very well be experiencing a different “Holler.”