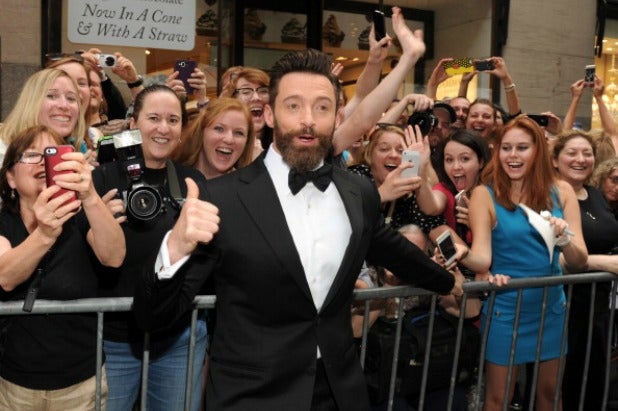 (Spoiler alert: Don’t read this if you don’t want to know what happened at the Tonys.)

The historical play “All the Way” won for Best Play and its star, Bryan Cranston, won for Leading Actor in a Play for his performance as President Lyndon Johnson at Sunday’s 68th Annual Tony Awards. “A Gentleman’s Guide to Love and Murder” won Best Musical.

“A Raisin in the Sun,” meanwhile, won for Best Revival of a Play, and director Kenny Leon won for  Direction of a Play.

“Hedwig and the Angry Inch” won for Best Revival of a Musical, and star Neil Patrick Harris won Leading Actor in a Musical. His performance from the show was the night’s showstopper: He licked Samuel L. Jackson‘s glasses and bounced on the laps of Sting and Kevin Bacon as he played Hedwig, an East German escapee who has endured a botched sex-change operation.

“All the Way,” by Robert Schenkkan, depicts Johnson’s efforts to navigate Civil Rights legislation through a recalcitrant Congress while dealing with the specter of Vietnam. Schenkkan thanked his entire 20-member cast, including “he who knocks, Bryan Cranston” — a reference to Cranston’s role on “Breaking Bad.”

Cranston said he saw his first Broadway play in 1977.

“I snuck into the second act of ‘Hair.’ To this day I still haven’t seen the first act. But they tell me the second act was better because there was more nudity. So I feel blessed,” he joked.

The show began with Hugh Jackman bouncing into his hosting gig, entering Radio City Music Hall one hop at a time, then leaping onto the stage and pogo-ing behind the scenes to greet Sting, Harris and the casts of such shows as “Rocky,” “Aladdin,” and “Beautiful.”

Jackman had also bounced in promos leading up to the show. Maybe it was the Australian actor’s salute to kangaroos? He never explained. When he returned from backstage, he introduced a performance from the musical “After Midnight.” It was the first of many musical numbers.

In his brief monologue, Jackman said the night was “a celebration of Broadway, the only place you can see Rocky in a boxing ring, Bryan Cranston in the Oval Office, and Wolverine in tap shoes.”

He said that Harris, a frequent Tonys host, texted him “Wow, that’s fantastic!” when he learned Jackman would host this year.

“I assume that’s what WTF means, Neil, right?” he joked.

He also joked about Harvey Fierstein’s play “Casa Valentina,” about cross-dressing in the Catskills.

“It highlights the tension between married men who cross dress and the gay community, two sides that never understood each other. It’s kind of like people who are against same-sex marriage and people who mind their own business,” Jackman said.

After the brief monologue, the show got to the awards. The first went to Mark Rylance for Featured Actor in a Play for his role in “Twelfth Night.”

Lena Hall won for Featured Actress in a Musical for her role alongside Harris in “Hedwig and the Angry Inch.” If there were an award for most ecstatic speech, she would have won that too.

“Oh my God, I only have 90 seconds!” she shouted, barely catching her breath before her list of gasped thank-yous. Among them were her sister, who she said did her hair.

She concluded with a line from “My Little Pony”: “Friendship is magic!”

In another highlight, Jonathan Groff correctly pronounced Idina Menzel’s name as she performed her number from “If/Then.” Her name became the most famously mispronounced in America when John Travolta called her Adele Dazeem at the Oscars.

Clint Eastwood, who is directing a film adaptation of “Jersey Boys,” handed Darko Tresnjak the Direction of a Musical award for “A Gentleman’s Guide to Love and Murder.” The musical was his Broadway debut. Eastwood also handed out the Direction of a Play award to Leon.

The award for Featured Actor in a Musical went to the genie of “Aladdin,” James Monroe Iglehart.

Audra McDonald, meanwhile, won her sixth Tony by winning for Leading Actress in a Play for her role in “Lady Day at Emerson’s Bar and Grill.” The tearful McDonald earned a standing ovation.

This being a CBS awards show, “NCIS: Los Angeles” star LL Cool J was enlisted to perform a rap song. He joined Jackman and T.I for a rendition from “The Music Man.” Jackman opined that the 1957 number might be the first rap song.