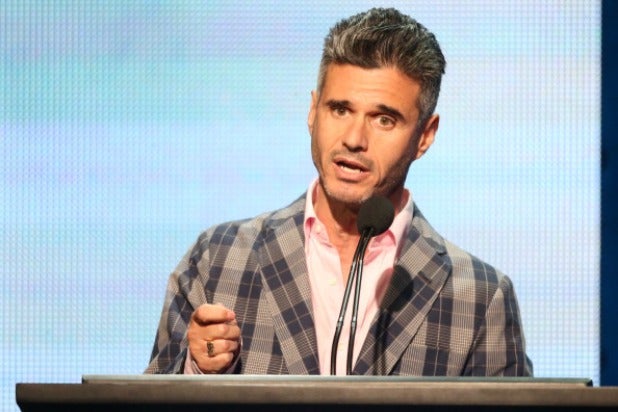 Like a lot of people, Evan Shapiro wants our society to slow down. But unlike most people, he runs a TV network. Which might make him seem like an unlikely advocate for more reflection.

Also read: The Man Who Greenlit ‘Portlandia’ Tells You How to Pitch

But Shapiro wants Pivot to be different. As the president of IFC, he greenlit “Portlandia,” a show about a city “where young people go to retire,” as Fred Armisen once explained.

Shapiro doesn’t want young people to retire — just take more time to think. He notes that in the real Portland, Ore., many people have collectively agreed to relax.

“That’s not the only town,” he said during a reflective hour with TheWrap, sitting in a Manhattan office next to a deck where he often goes to collect his thoughts. “You can go out to Williamsburg. Go to western Massachusetts. There is this return to the analog.”

“Beer-making, and butchery, and the slow food movement,” he continued. “People are building things again. There’s going to be – not a backlash – but a great societal reaction to the technification of our lives, and this generation is very into that. There’s an analog aspect to the millennial generation that I think a lot of people don’t realize.”

Shapiro doesn’t want to slow down because he’s lazy: You don’t get to run three networks by 46 if you’re lazy. (He ran Sundance as well as IFC for AMC Networks.)

Also read: Meghan McCain Talks New Show: ‘I Get Heat For Every Single Thing I Do’

But he believes taking things down a notch would make us a smarter, more efficient country.

“I think that speed kills, and if you look at a lot of the problems that we’ve had in the last 30 years, in the last ten years, they’re all created by this faster, faster, faster. And that’s how we get into wars without thinking first. There’s been a series of articles written about how the speed of trading has created a sense of fear in the stock market. … There’s a great deal of fear.”

The need for speed has also led to more mistakes in the news media. Pivot’s Eyes Wide Open campaign encourages viewers to scrutinize everything they read and watch – even Pivot’s advertising.

TV, Shapiro says, can lead the patient charge toward deeper thought. When he worked for AMC Networks, he

remembers seeing the pilot for “Mad Men,” a show that takes a patient, novelistic approach to storytelling.

“To be perfectly blunt, I worked at that company at that time and I watched it like, ‘Ain’t nobody gonna watch this TV show. It’s never gonna happen. Nothing f—in’ happens,'” he recalled. “And my boss didn’t listen to me, and thankfully greenlit that show. And it was a major shift in storytelling. And now I’ve had conversations with writers and storytellers, where I’m like, ‘Slow. Down. This pilot is an entire season. Slow down.'”

But there are those who can afford to slow down, and those who can’t. Walking through hipster enclaves like Portland, you may wonder: How do these people have so much time to make artisanal cheese? Do they have rich parents?

For Pivot, the answer is yes.

The network is owned by Participant Media, the film and TV production company behind such socially conscious films as “As Inconvenient Truth,” “The Cove,” “The Help” and “Lincoln.” Owned by Jeffrey Skoll, a billionaire Canadian who was eBay’s first employee and president, Participant aspires to make audiences think.

Shapiro won’t say how much Participant has invested in Pivot, except this: “a lot.”

Another luxury: Pivot, which debuted in August, isn’t releasing ratings in its early days. That takes some pressure off Shapiro, even though it makes the network a tougher sell to advertisers.

“We’re a double bottom-line company, so we’re going to be judged just as stringently on the lasting and sustainable change we create as we are on the profit we create,” Shapiro said. “We’re held to both standards.”

And what about those just scraping by? Is Shapiro worried that we’re splitting into two societies, one where frazzled people barely provide for their families, and another where bearded hipsters indulge analog fancies, aided by trust funds? The divide isn’t so clean, obviously — but some people have more financial freedom than others to relax and reflect.

Shapiro thinks a more thoughtful approach to problem-solving would break down barriers, rather than reinforce them.

“You put your best people on your biggest problem,” said Shapiro. “One of the biggest problems in this country is food deserts. It takes three buses and three hours to get to fresh produce. And when you get there you can’t afford it. So you have McDonald’s and 7-Eleven. There’s an organization that we’re working with called The Franklin Project that is working to create a million service-oriented jobs – basically, a domestic version of the Armed Forces. Pay people to go into places like rural Kentucky to solve the problems.”

Though Participant has aligned itself with prominent liberals like Al Gore, political labels aren’t as important to young viewers as they are to older ones, Shapiro believes.

“People under 30, it’s just not as big a competition,” he said. “They don’t feel the need to win every conversation. They like to have the conversation. I think that’s where media needs to intervene.”

One of the network’s most prominent personalities is Republican Meghan McCain, whose “Raising McCain” takes a gonzo journalism approach to issues like Internet privacy, veterans returning from war, and feminism. McCain (with Shapiro, left) often changes her mind along the way.

The network’s news and information show “Take Part Live,” meanwhile, features the kinds of lengthy panel discussions rarely seen on broadcast news, or even cable shows, where partisan arguments tend to fill in for real debate.

“Pivot wants to be a place to spark conversation and to create community, where we can actually help solve the world’s problems,” said Shapiro. “We’re not going to solve them. We think our audience is.”

Other shows include the slow-burn comedy “Please Like Me” and the docu-series “Jersey Strong.” The latter  follows two women, a reformed gangbanger and a defense attorney, as they try to turn around Newark, N.J. Unlike most reality shows, there’s no need to ramp up the drama. Life provides plenty of it.

“We didn’t create a reality show,” Shapiro said. “We shot a documentary, and then we cut it into a reality show. We didn’t script it. We didn’t force the conversations. We shot for a year. And then we made a reality show out of that. Those are the types of things we need to do in order to facilitate the slowing down. Allowing television to be not just a lean forward, but also a respite. A time to flush out your mind and let new thought enter it. Reading new things, finding new points of view, is the most important thing we can do to evolve our culture. And right now, the speed at which we’re moving prohibits that.”