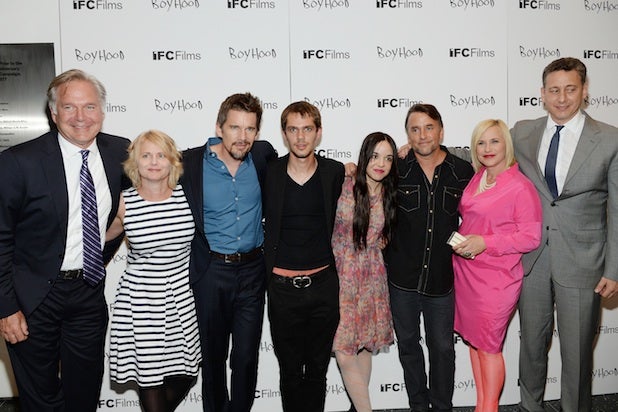 Richard Linklater‘s “Boyhood” is a likely contender for year-end awards, but the film’s unusual and drawn-out production process has caused a problem when it comes to exactly who deserves awards and nominations for the film.

According to individuals with knowledge of the proceedings, the Producers Guild of America has ruled that two of the four credited “Boyhood” producers, Linklater and Cathleen Sutherland, deserve the “produced by” credit and will be named if the film is nominated by the PGA. But the guild also ruled that the two other credited producers, IFC Films president Jonathan Sehring and Cinetic Media’s John Sloss, do not warrant the credit and will not receive nominations.

In most but not all cases, the Academy goes along with the Producers Guild’s decisions about which producers deserve credit and nominations.

Linklater made “Boyhood” a couple of weeks at a time over the course of 12 years, following young actors Ellar Coltrane and Lorelei Linklater (the director’s daughter) as they grew from grade school to college, and Patricia Arquette and Ethan Hawke as they matured from their early 30s to their mid 40s.

Linklater and Sutherland were always on set, with Sehring and Sloss additionally involved from the beginning. Sehring also green-lighted the film and financed it, one year at a time, over the course of its production.

All four were identified as the film’s producers in its credits, but the PGA is the arbiter of which credited producers will receive nominations and awards if a film is honored by the guild.

The PGA has a detailed list of jobs a producer must perform in order to merit the “produced by” credit, which in many cases is now identified with a p.g.a. (the “Producers Mark”) after the producer’s name.

To qualify, a producer “must have performed a majority of the specific producing functions … throughout the four phases of the motion picture’s production.” Those four phases are development, pre-production, production and post-production; each has between five and 11 specific jobs, ranging from conceiving of the underlying concept to consulting on the visual effects.

Sehring and Sloss were judged not to qualify under guild guidelines. They appealed the initial decision, but lost that appeal.

Sehring and Sloss released a joint statement to TheWrap that reads, “‘Boyhood’ was made in a unique and unconventional way and our job was to ensure that Rick had the creative freedom to create a work of art that defies the boundaries of a typical film production. We’re thrilled that audiences have embraced this labor of love with such warmth and that is what’s most important to us.”

In recent years, the Academy has typically agreed with the Producers Guild on credits. When the guild denied Relativity’s Ryan Kavanaugh a nomination for “The Fighter,” for example, he appealed to the Academy, which went along with the PGA’s decision.

On some occasions, though, the Academy has overruled the guild. Last year, for example, the PGA ruled that only three of the five credited producers on “The Wolf of Wall Street” deserved nominations: Riza Aziz, Emma Tillinger Koskoff and Joey McFarland. The AMPAS Producers Branch, on the other hand, removed Aziz and added Martin Scorsese and Leonardo DiCaprio, both of whom had been denied by the guild.

Sehring and Sloss have not revealed, and perhaps not decided, whether they will appeal to the Academy in the event “Boyhood” is nominated.