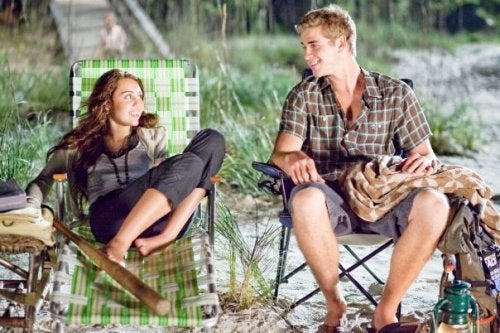 So how did Miley do?

Now that the pop princess is emerging from her Disney singing cocoon to tackle acting full-time — or so she said last week — the "Hannah Montana" star subjects herself to legitimate film criticism when her new movie, "The Last Song," hits theaters this weekend.

And it’s … not pretty. Mostly.

"The Last Song" currently has a 13 percent rating on Rotten Tomatoes (out of 47 reviews, only 6 are deemed ‘fresh’), and a score of 38 on the more discerning MetaCritic. TheWrap has rounded up what the critics are saying about Cyrus’ performance — and while Roger Ebert appears to be a fan, there are many others who aren’t quite as positive.

THE GOOD (I’m being generous)

• "The fact is, she does a good job of making her character Ronnie engaging and lovable. That’s despite her early Alienated Teen scenes … Her acting is unaffected, she can play serious, and she works easily with a pro like Kinnear… She even seems sincere in the face of a plot so blatantly contrived it seems like an after-school special … The movie is intended, of course, for Miley Cyrus admirers, and truth compels me to report that on that basis alone, it would get four stars." – Roger Ebert, Chicago Sun-Times

• "The trick for any starlet making the transition from teen queen to adult roles is finding just enough edge. Miley Cyrus does that with The Last Song … There’s real chemistry between the young lovers and an old fashioned virtue to the father-daughter scenes …" – Roger Moore, Orlando Sentinel

• "Cyrus, alas, hasn’t yet learned not to act with her eyebrows and overbite. But she does show off her considerable chops as a pianist and remains reasonably likable throughout." – Rob Nelson, Variety

• "Director Julie Anne Robinson does the best she can with what she has, coaxing competent performances from the two leads … ." – Keith Uhlich, Time Out New York

• "Cyrus, though she seldom strays from her two primary modes, pouting rebel or toothy girlfriend, has a winning on-screen presence, if only for her enjoyably abrasive edge in this deep well of pathos. Ultimately though, the pop star’s bottomless pool of spunkiness isn’t enough to buoy a script that sinks right past ordinary sentimentality to sadism." – Liam Lacey, Toronto’s Globe and Mail

• "A hardened showbiz veteran at 17, Cyrus plays an angry, heartbroken girl in a way that, sad to say, shows off her "Hannah Montana"-drilled tricks and tics and air of entitlement more than her dramatic range." – Michael Phillips, Chicago Tribune

• "Miley Cyrus sulks and sneers her way through her first dramatic role. There is a modicum of chemistry between the rebellious Ronnie and the polite and ecologically minded Will (Liam Hemsworth). But, perhaps to hedge her shaky dramatic bets, about halfway through the movie, Cyrus bursts into song along with the radio. Hemsworth duly compliments her, lest we forget her claim to fame." – Claudia Puig, USA Today

• "A more convincing star could make this a degree more tolerable, although in Cyrus’s defense not much more. She’s cute whether she’s smiling, crying, or wearing a pretty lavender dress. It’d be nice to see her do some acting, but that doesn’t appear to be high on the movie’s list of priorities. Allegedly, this is the film in which Cyrus gets all, like, dramatic. If by “dramatic’’ one means pouty, sullen, and cute, then OK. But it’s not tragedy you sense behind those big brown eyes. It’s a party in the USA." – Wesley Morris, Boston Globe

• "As Ronnie, Cyrus is two-note: Petulant or tentatively hopeful. Despite (or because of) years of TV training, Cyrus lacks emotional range. She moves with self-consciousness, as though acutely aware of the camera. Still, her moods are relatable … ." – Carrie Rickey, Philadelphia Inquirer

• "It’s hard to believe this bland starlet is the same spunky kid who bounced through the Hannah Montana movie just last year, but it’s only fair to cut Cyrus some slack." – Elizabeth Weitzman, N.Y. Daily News

• "Nothing else about The Last Song — not Cyrus’ stiff, unconvincing acting, the sentimental dialogue or the falsely upbeat ending — is pretty at all." – Connie Ogle, Miami Herald

• "Cyrus’s Everygirl charm is honed to a fine point by years as a Disney star, but she’s not nearly enough of a natural actress to pull off the emotional whip cracks the story puts Ronnie through." – Dan Kois, Washington Post

• "The acting is similarly an unconnected series of camera-ready smiles and poses. Only Kinnear survives the attrition, sort of." – Michael Ordona, L.A. Times

• "It’s not surprising that in the hands of a first-time director and first-time screenwriter, nobody in this movie behaves like a recognizable human being, but it is surprising that Cyrus comes across as such an unlikable sourpuss. On ‘Hannah Montana,’ she had a flair for broad comedy, and in real life she seems to be handling her fame reasonably well. If Cyrus let her handlers decide that a rote exercise like ‘The Last Song’ should be her next act, we’ll write it off as a first offense." – Joe Williams, St. Louis Post-Dispatch

• "Another big problem is Ms. Cyrus. Her Hannah Montana persona has a certain aggressive charm, though I wish my kids would turn down the volume sometimes, and she seems to be a young celebrity with a good attitude and a strong work ethic. But acting, for the moment at least, seems almost entirely beyond her. In ‘The Last Song’ she pouts, slouches, storms in and out of rooms and occasionally cracks a snaggle-toothed smile, but most of the time she seems to be mugging for the camera, play-acting rather than exploring the motives and feelings of her character." – A.O. Scott, New York Times

• "It’s the worst of both worlds as Disney cash cow Miley Cyrus makes the most dubious "dramatic" debut of any singer since Britney Spears in ‘The Last Song …’ Displaying approximately 1½ expressions, the teenage Cyrus pouts her way through a fire, a wedding and a funeral — not to mention intervening in an abusive relationship, digging out guilty secrets and resisting overtures from her dad, whom she’s never forgiven … Miley is also making a halfhearted attempt to resist romantic overtures from a volleyball-playing rich boy portrayed by bland Aussie hunk Liam Hemsworth, who has become Cyrus’ boyfriend in real life — something not at all reflected by their total lack of on-screen chemistry … Because "The Last Song" is an attempt to position Cyrus as an actress, her singing is limited to briefly accompanying a song by Maroon 5 on the radio. "Wow! YOU CAN REALLY SING!!!" says the boyfriend. To paraphrase ‘Citizen Kane,’ that, thankfully, isn’t my department. But act? I don’t think so." – Lou Lumenick, N.Y. Post

• A serious star vehicle for a rabbity, charmless, pint-size marketing juggernaut, ‘The Last Song’ deprives viewers of the only reliable pleasure in the Sparks filmography — watching actors, of varying talents, evince real emotion and passion from the syrupy source material … I can’t recall ever squirming as much as I did during Ronnie and Will’s first kiss; shiny, buff Hemsworth looks like he’s locking lips with an Andy Hardy–era Mickey Rooney in a wig (he must have liked it—the two are reportedly now dating). The Cyrus machinery repels any believable human connection onscreen, though she’s not helped much by Sparks and Van Wie’s script …" – Melissa Anderson, Village Voice

• "Because the bottom line here is that Cyrus is ghastly in ‘The Last Song,’ bad not just in one or two ways, but in all kinds of ways. It was a disservice to the audience, to the material and to Cyrus herself that she was put in this position … Cyrus can’t think onscreen, which means she really can’t act. All she can do is play an attitude." – Mick LaSalle, San Francisco Chronicle

• "’The Last Song’ is refreshing from one perspective. For a change, it isn’t Miley Cyrus who gives the worst performance in one of her movies. Mind you, that doesn’t mean she’s matured as an actress, and her performance certainly doesn’t make the movie watchable. She’s joined by other, similarly incompetent performers here … The one person here who doesn’t embarrass himself is [Greg] Kinnear." – Jeff Vice, Deseret News