Moments before Vice President Kamala Harris was set to sit down with “The View” for an interview on Friday’s show, Ana Navarro and Sunny Hostin tested positive for COVID-19 and were taken off the show’s set.

Both co-hosts were removed midshow, which caused confusion from the audience.

“There seems to be something happening here that I’m not 100 percent aware of,” fellow cohost Joy Behar said, during the start of a segment. “Can someone please apprise me of the situation?”

An off-camera voice could be heard telling Navarro and Hostin, “we need the two of you to step off for a second.” Behar was then going to introduce Harris, but was told “no” by another off-camera voice, and the show went into a commercial break. 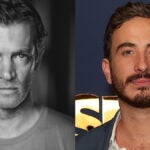 Behar broke the news of the two’s positive test results when the show came back.

“Since this is going to be a major news story any minute now, what happened is Sunny and Ana apparently tested positive for COVID. No matter how hard we try these things happen. They probably have a breakthrough case. They will be OK I am sure because they are both vaccinated,” Behar said.

The vice president ended up doing the interview from a remote location in the studio, with Behar and Sara Gaines conducting it from the show’s set.

“Sunny and Ana are strong women and I know they’re fine, but it really also does speak to the fact that they’re vaccinated and vaccines really make all the difference because otherwise we would be concerned about hospitalization and worse,” Harris said when she finally joined the show.