Vin Diesel was driving the box office at the start of the summer and he’s back on top on Hollywood’s first weekend of fall, as his sci-fi thriller “Riddick” opened at No. 1 with an estimated $18.7 million.

The weekend’s only wide opener easily knocked “Lee Daniels’ The Butler,” which had been No. 1 for the past three weeks, into second as the civil rights saga took in $8.9 million. It was close for third between “Instructions Not Included” and “We’re the Millers.” Lionsgate estimated its surprising Spanish-language family film would finish the three days with $8.1 million while Warner Bros. projected its Jennifer Aniston‘s pot comedy would wind up at $7.9 million.

Diesel helped get the record-breaking summer off to a fast start when the blockbuster “Fast & Furious 6” opened to $97 million back for Universal in the May. The latest installment in the $2.3 billion cops-and-criminals franchise is on its way to $800 million worldwide and there’s another planned next summer.

That success made it easier for the studio to come back on board for “Riddick,” the third entry in the series about the intergalactic alien anti-hero, which was a passion play for Diesel. The action star had to fight to get it made, securing the rights from Universal (in exchange for a cameo in “Fast and Furious: Tokyo Drift”) and, with director David Twohy, seeking out the financing to get the $38 million film made.

Also read: Toronto: Emma Watson to Play Bipolar Englishwoman in ‘Your Voice in My Head’

Universal had backed the first two “Riddick” movies, the 2000 cult hit “Pitch Black,” which was Diesel’s breakout movie, and 2004’s “The Chronicles of Riddick.” But it opted out after “Chronicles,” which took in $115 million worldwide but had a hefty $105 million production budget.

After financing “Riddick” mainly through foreign rights sales, Diesel was looking for a U.S. distributor – and Universal was there.

The “Riddick” grosses were a little above the studio’s projections and a little under analysts’ expectations, and short of the $24 million debut of “Chronicles.” The R-rated sci-fi thriller played male (59 percent) and older (53 percent over 30) than might have been expected.  Imax helped, delivering about $2.5 million from 314 screens.

“The Butler” fell off 40 percent from last week, and the historical drama starring Oprah Winfrey and Forest Whitaker is up to nearly $92 million million domestically in its fourth week.

The family-angled “Instructions Not Included,” written, directed, produced by and starring Eugenio Derbez, continued to impress and crossed the $20 million in its second week. Lionsgate’s Pantelion Film expanded it into 717 theaters after its four-day $10 million debut on 347 screens hast weekend, the biggest ever for a Spanish-language film. It worked — it’s $11,297 per-theater average was the best of any film in wide release.

“We’re the Millers,” which co-stars Jason Sudeikis, has now taken in $123.8 million in five weeks for Warner Bros. That moves it into 16th on the year’s earnings list, ahead of “G.I. Joe: Retaliation.”

It was close for fifth place, too. Sony estimated its 3D concert movie “One Direction: This is Us,” which had the best three-day total over the long Labor Day weekend, would finish with $4.1 million. Disney was projected its family-targeting “Cars” spinoff would wind up at $4.2 million.

Sony re-released its raunchy Seth Rogen comedy “This is the End,” which came out in June, so that it could hit the $100 million mark in domestic grosses. It’s doing the trick, and after bringing in $2 million from  2,161 theaters it’s at $98.9 million. 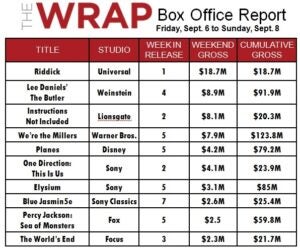