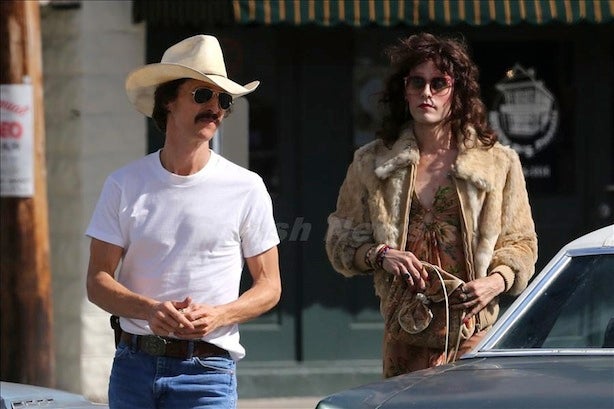 Jared Leto hasn’t made a film in five years, but he lost an astonishing 40 pounds to play a transsexual with AIDS in “Dallas Buyers Club,” which premiered to an enthusiastic audience at the Toronto Film Festival on Saturday night.

How did he do it? “I stopped eating,” he told TheWrap at the after-party for the film on King Street in downtown Toronto. It wasn’t an easy thing to do, he said.  “It was 30 or 40 pounds. After a while I stopped counting.”

Ultimately his weight dropped to (gulp) 114 pounds to play Rayon, a transsexual with the HIV virus and then AIDS. Losing that much weight changed him, he said. “It changes the way you walk, the way you sit, the way you think,” he said.

But the film does not dwell on the weight loss of either Leto – who is shockingly gaunt but still remarkably beautiful in the role – or McConaughey, who dropped a similar amount of weight by, he told TheWrap on Saturday, staying home for weeks and carefully monitoring what he ate. (“You just make a decision,” he said.)

Instead the film is a deeply affecting drama about Ron Woodruff (McConaughey), a Texas electrician who has HIV but determines to go around the medical establishment in order to find treatment for himself and others affected with the virus. Leto plays his friend who initially tries the AZT drug, but eventually joins forces with Woodruff as he smuggles and sells alternative drugs from Mexico.

Jennifer Garner plays a doctor caught between her desire to help AIDS patients and following the rules of a slow-moving medical establishment.

Leto had basically stopped making films for the past five years to focus on what is now his primary career as the frontman for the band Thirty Seconds to Mars, which tours and has sold millions of albums to date. “Dallas Buyers Club” was the first film that justified taking a break from that, he said.

He told his manager that he would take a break only for a film “he fell in love with,” and this story qualified.

The weight loss of Leto and McConaughey made headlines last year when photos emerged of both lead actors. Both were still slim when they appeared at the premiere but restored to more normal appearances. The performances of both actors are likely to be prominent in the awards conversations this season.