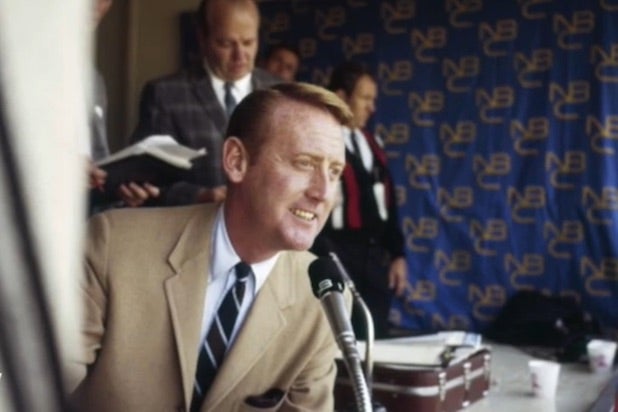 Vin Scully for president? It could have happened, according to a newly-revealed story from the beloved commentator.

As the Los Angeles Dodgers begin their campaign to end their 28-year World Series drought, Scully, 88, is beginning his retirement after 67 years of unparalleled sports broadcasting. Scully has become known as arguably the greatest commentator of all-time thanks to his penchant for storytelling, but this might be the most amazing tale he’s ever told.

Once upon a time, he was asked to run for the U.S. Senate.

While making the press rounds during the final days of his career, Scully recalled the time he got a call from the California Democratic Party asking if he ever considered a career in politics, NBCLosAngeles reported. The year was 1964, and Democratic Senator Clair Engle had passed away from a brain tumor. The Democrats were looking for an ideal candidate to run in the race to fill Engle’s seat, and in the wake of John F. Kennedy’s famed domination over Richard Nixon in the first ever televised debate, the demand for candidates who could handle the pressures of television was high. Scully, with his experience in broadcasting and his overwhelming popularity, perfectly fit the bill.

While Scully politely listened to their offer and asked them to give him a couple days to think about it, he said that he never once truly considered walking away from his dream job of being a baseball commentator.

“I called them and said, ‘I’ve given it a lot of thought,’ even though I hadn’t,” Scully said. “‘I don’t think I’m qualified and I’m sure I would be happier doing my baseball games.'”

Instead, the Democrats went with JFK’s press secretary, Pierre Salinger, who had been appointed to fill Engle’s seat for the five months remaining in his term. Salinger lost the seat handily to former vaudeville singer and Screen Actors Guild president George Murphy, who became the first Hollywood star to hold political office just four years before Ronald Reagan became Governor of California.

“Murphy won in a landslide and that was virtually the end of Salinger’s political career,” Scully recalled, according to NBC.

So instead of heading off to Capitol Hill in 1965, Scully returned to Dodger Stadium where, that very year, he would help immortalize one of the most famous moments in baseball history: Sandy Koufax’s perfect game.