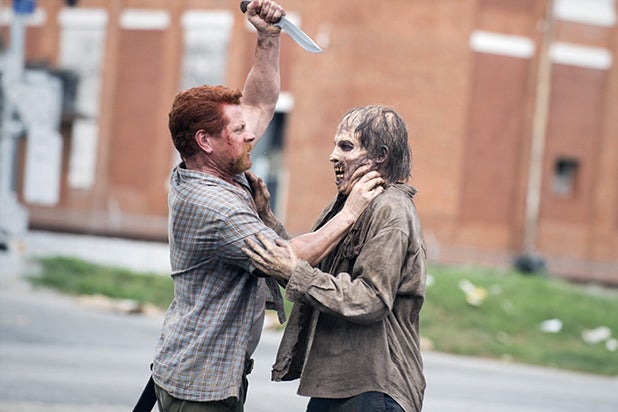 (Spoiler alert: Do not read on if you have not yet seen Sunday night’s episode of “The Walking Dead” entitled “Self Help.”)

Sgt. Abraham Ford (Michael Cudlitz) flirted with both suicide and murder on Sunday’s game-changing and exceptionally bloody episode of AMC’s “The Walking Dead.” The actor thinks his character’s dramatic moments and gut-wrenching back story will make him sympathetic with audiences, but he knows he won’t please everyone.

“We are arguably the biggest show in the world right now, but there are people who get pissed off every week about every episode,” he told TheWrap. “The majority love it, but then there’s a faction that hates it. And then, next week, that faction will love it and another group will hate it.”

“I don’t think there’s any way to end the series where everybody’s happy,” he added.

It focused on the Washington D.C.-bound group of Abraham, Eugene (Josh McDermitt), Glenn (Steven Yeun) Maggie (Lauren Cohen), Rosita (Christian Serratos) and Tara (Alanna Masterson). There was sex, mayhem, a bus on fire, a dozen or so walkers being mowed down by a firetruck hose and — most importantly –there were two huge reveals.

Eugene isn’t a scientist, first off. He pretended to be one so Abraham would keep him alive in the hopes of finding a cure.

The other big jaw-dropper (shown in a flashbacks) is that Abraham was on the brink of suicide. He had lost everyone who meant anything to him and was seconds away from eating a bullet before a chance first encounter with Eugene.

So in a way these two characters saved each other. But that didn’t stop Abraham from pummeling Eugene bloody after learning the mullet-sporting fraud had sabotaged their bus, nearly killing the group.

Abraham’s frustrations were justified, but his brutal assault might have turned some fans off. But Cudlitz says his job as an actor is to play the character to his best of his ability, not to be a fan favorite.

Also read: 'The Walking Dead' Gets Back to the Business of Killing and Dying

Cudlitz knows an ensemble drama like “The Walking Dead” can survive only if every actor, producer and crew member involved puts the show above all else.

“I think [showrunner] Scott Gimple has done a terrific job bringing [creator Robert] Kirkman’s characters to life,” he explained. “Everybody is important, even if they’re not in the ‘A story,’ even if they’re not the focus. It’s the only way to tell stories with a large ensemble.”

He compared the experience to working on the HBO’s Emmy winning World War II-set miniseries, “Band of Brothers.”

“[‘Band of Brothers’] was the same type of thing. Guys in the background busted their asses just as hard as when they were in the forefront, because you want those people working just as hard for you when it’s their turn to step up to the plate.”

The bursting of the Washington D.C. bubble is another undeserved blow to a group who has already suffered through too much. But by now fans realize what’s bad for “The Walking Dead’s” characters is often good for the story.

And Cudlitz, for one, is happy for the group to put the search for the zombie cure behind them.

“I’m excited we’re past our D.C. phase,” Cudlitz confessed. “The audience wants to know more about [Abraham’s] back story, but we weren’t able to talk about any more of that until we moved forward. And we have this week.”

But where can they go next? Will Abraham put another gun in his mouth now that the mission that kept him going has been aborted? Cudlitz doesn’t think so.

“[Abraham] has more reason to live than he did,” Cudlitz said. “He was at rock bottom; he had nobody in his life. But now he does have someone in his life.”