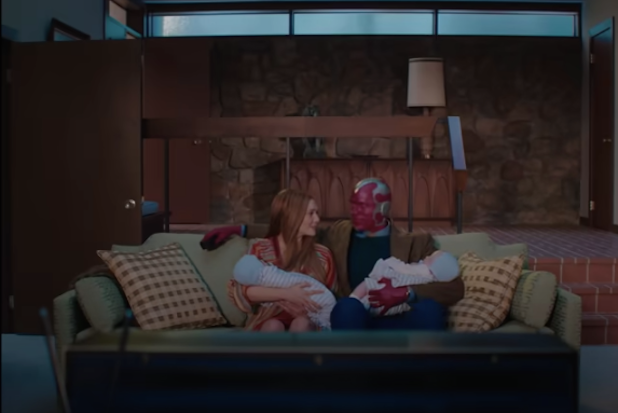 There’s no shortage of weirdness when it comes to Marvel’s new series “WandaVision.” In the quaint, almost too perfect world of Westview, there are tons of bizarre clues to pour over and questions that need to be answered.

But one of the weirdest things so far is also the most ominous. In the second episode, Wanda becomes more involved in neighborhood life. She joins the planning committee for a magic show fundraiser, which is headed by a woman named Dottie (Emma Caulfield). During a speech to the group, Dottie specifically says the fundraiser is “for the children” — a line that everyone else repeats in unison. The response is almost cult-like, and considering the fact that there aren’t, actually, any children we’ve seen in Westview at all so far…yeah. It’s creepy.

Just to make things weirder, Wanda and Vision both repeat the line later that night after getting home from the magic show — and immediately after they say it, Wanda appears to be visibly pregnant. Wanda’s pregnancy comes with its own set of questions, but is it possible that it’s related to the mantra that’s been repeated throughout the episode?

Also Read: 'WandaVision': What You Need to Know About That Sword Logo

Is there someone who wants her to have children for future superhero purposes, and is therefore attempting to make it happen? Someone like…Mephisto?

A demon who convinces people to sell their souls and manipulates humankind, Mephisto can warp reality the same way Wanda can. He has a significant comic history with Wanda, as he’s the way she creates her two children, Tommy and Billy. Wanda unknowingly uses Mephisto’s disassembled soul to magically become pregnant (what with Vision being an android and all) and when Mephisto’s soul is reassembled, she loses her twins — hence how the “House of M” storyline comes into being. Wanda’s witch mentor, Agatha Harkness, wipes her memory of having children to avoid her spiraling into cataclysmic grief, which basically backfires when those memories resurface years later, leading Wanda to rewrite reality to mold the world to her own happiness.

Look, artificial insemination for a hero who’s already been pretty traumatized and is currently living out that trauma through this world seems a little dark, even for Marvel. But we already know from promotional material that Wanda will have twins, who, it’s fair to assume, will be Tommy and Billy. Not only is that a potential groundwork for “Young Avengers,” but Kevin Feige has specifically noted that “WandaVision” will directly set up “Doctor Strange In the Multiverse of Madness.” There’s been a lot of rumors that “WandaVision” will do that via the official introduction of the multiverse, something Mephisto could definitely factor into.

As with anything Marvel teases, we have to wait and see where this is all headed. But one thing’s for sure: “WandaVision” is about to get weirder.