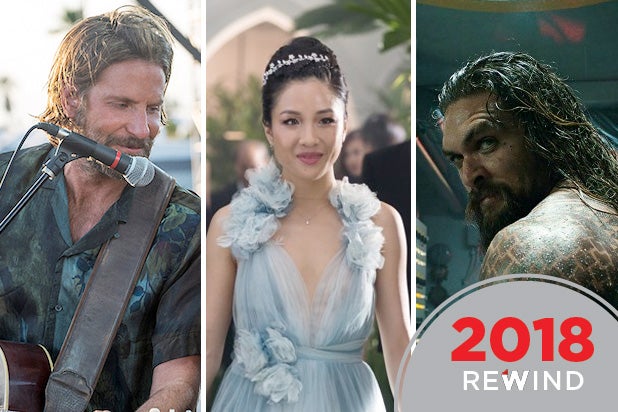 Warner Bros. continues to play catch-up to Disney in the box office derby, but the new division of AT&T is on track for a domestic box haul of about $1.8 billion in 2018 — just ahead of Universal to claim the No. 2 slot in market share, behind Disney, for the third straight year.

The domestic ticket sales represent a slippage from 2017, when the studio crossed the $2 billion threshold on the strength of monster hits like “Wonder Woman” and “It.”

This year, Warner’s box office success is led by two unlikely mid-budget hits — the August rom-com “Crazy Rich Asians” and Bradley Cooper’s musical reboot “A Star Is Born” — as well as the end-of-year superhero blockbuster “Aquaman,” which is on track to earn nearly $200 million in North America by New Year’s Day.

“The most consistent performers are obviously Disney, that has been in a league of its own, Universal and Warner Bros. have been back-to-back 2 and 3,” Tuna Amobi, media analyst at CFRA Research told TheWrap. “Those are the studios that have really outperformed the other studios. It’s all about consistency.”

How is this for consistency? “A Star Is Born,” which cost $36 million to produce and is expected to be a serious awards contender, just crossed $200 million at the domestic box office (and $376 million worldwide).

Among the disappointments, audiences may be showing signs of Dwayne Johnson fatigue as the $120 million “Rampage” barely topped $101 million in North America (while earning $327 million abroad). The Alicia Vikander-led attempt to reboot the “Tomb Raider” franchise had a $94 million budget but earned just $58 million domestically (though it did earn $216 million overseas).

There are also some danger signs for Warner’s wizarding franchise based on J.K. Rowling’s fantasy world. “Fantastic Beasts: The Crimes of Grindelwald,” the $200 million-budgeted second spinoff sequel to the “Harry Potter” series, made $613 million worldwide — $200 million less than the first “Fantastic Beasts” earned in 2016. (The drop in North America alone was $80 million.)

That decline has to give the studio pause as it prepares to begin production this summer on the third film in what it has promised will be a five-film series.

On the business side, the studio watched as AT&T managed to complete its $85 billion acquisition of parent company Time Warner — despite legal efforts to block the deal by President Trump’s Department of Justice — and to announce plans for a three-tiered streaming service to compete with both Netflix and Disney’s upcoming Disney+ service.

And the studio saw some corporate shuffling on the eve of the merger, with Toby Emmerich promoted to chairman of the motion picture group, and Blair Rich replacing Sue Kroll as president of worldwide marketing while Ron Sanders took over as head of worldwide distribution.

But there’s an important distinction to be made: The soft landing of “Justice League,” which topped out at $657.9 million, helped depress WB’s expected 2017 take. It’s looking like “Aquaman” will do the opposite.

Speaking of superheroes, 2018 will also go down as the year the studio got its DC Films unit back on track. “Aquaman” is expected to propel the studio into second place in market share for the third year in a row by the end of 2018. The diversity of 2018 slate seemed to be the best strategy for the studio.