America Held Hostage (By Betty White), Day 82: We missed tonight’s no doubt Betty-rific taping of the TV Land Awards. But at least we have this cover of alternative weekly the Portland Mercury.

Yes, it’s a metal chick, bikini-clad image of Betty White. Holding a flaming buzzsaw. And riding a centaur with the head of the late John Ritter. While a volcano explodes in the background.

The only thing missing: Urkel!

This cover was apparently designed, in part, based on suggestions from readers. So now we know where Bill Maher and Willie Nelson get their good stuff. 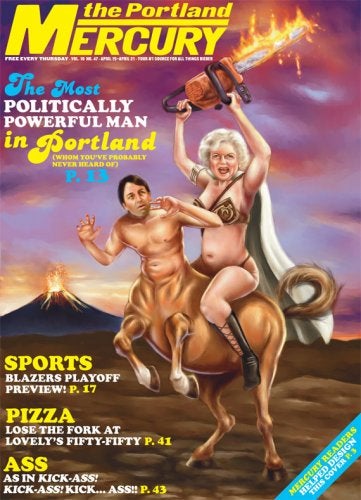