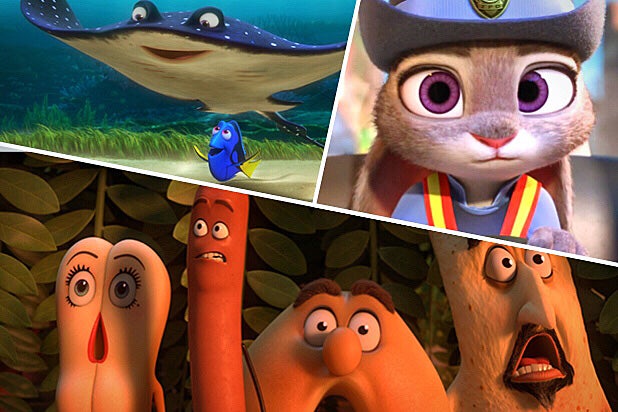 When it comes to making a hit movie this year, studios have gone back to the drawing board. From “Finding Dory” and “Zootopia” to “Sausage Party,” animation has been the story — and savior — of the disappointing 2016 box office.

Three of the ten highest-grossing animated movies of all time hit theaters this year, with “Dory” in the top spot, as it gulped down $476.8 million at the domestic box office and $897.6 billion worldwide. Disney’s “Zootopia” and “The Secret Life of Pets” from Universal’s Illumination Entertainment placed ninth and 10th, with $341.3 million and $336.2 million, respectively.

That theme has held true even during slower months. Sony’s “Sausage Party” just broke the all-time opening weekend record for an animated movie in August, serving up $33.6 million. That more than doubled the studio’s $15 million estimate, which was welcome news on the heels of “Ghostbusters,” a box office flop. And Warner Bros.’ “Storks,” Fox’s “Trolls” and Disney’s “Moana” — which features music from “Hamilton” creator Lin-Manuel Miranda — will all hit theaters before the end of the year.

Why have animated films been so dominant in a year where sure things other than cartoons and Marvel superhero flicks seem as elusive as ever?

One big reason is that animated movies play well overseas — especially in China, the world’s second-biggest movie market — and have a much wider appeal even at home than the sequels and niche movies Hollywood has been churning out lately. But maybe more importantly, this year’s crop of animated films is really good — and a lot of their box office competition isn’t.

One distinct advantage of animation over live action is that it’s not terribly difficult to produce customizable alternate language versions that look perfectly natural, with characters’ mouth movements aligned with the specific soundtrack. That’s helped drive some of the monster international box office returns of this year’s animated films, particularly in China.

DreamWorks’ “Kung Fu Panda 3” was animated in English and Mandarin, and made $153.4 million in China. “Zootopia’s” Chinese version helped it make $235.6 million there, becoming the highest-grossing animated and Disney films ever in China, and breaking the $1 billion mark worldwide. And the Hindi, Tamil and Telugu versions of “The Jungle Book” — a live-action/animation hybrid — carried it to $38.8 million at Indian cinemas, making it the country’s highest-grossing imported film of all-time in just 12 days. Animated characters can also be ethnically and racially ambiguous, which can broaden their appeal across cultural and geographic borders.

All of that gives animated movies wider appeal — and strong international revenue streams that encourage further investment in them — but the fact that these movies are good helps even more.

The information dissemination machine that is social media has caused poorly reviewed movies like “Suicide Squad” to plunge precipitously during their second weekends, and the opposite effect is true for films like “Deadpool” and “Zootopia,” which got significant boosts and long tails from the virtuous cycle of positive reviews and word of mouth.

“Zootopia” has a sterling 98 percent rating on film review aggregator site Rotten Tomatoes. “Finding Dory” has a 94 percent, “Kung Fu Panda 3” an 87 percent, and “The Secret Life of Pets” a 74 percent. Even the decidedly adult and vulgar “Sausage Party” managed to snag an 82 percent, which helped it blow past opening weekend expectations.

That’s definitely a contrast from the other big films of this year, which have been a mixed bag at best. Warner Bros.’ “Batman v Superman: Dawn of Justice” and “Suicide Squad,” this year’s seventh- and eighth-highest grossing movies, both have 27 percent Rotten Tomatoes scores. “Captain America: Civil War” and “Deadpool,” the number two and three movies of the year, were the only two movies without an animated component in this year’s top 10 with Rotten Tomatoes scores above 80 percent.

Hollywood hasn’t forgotten how to make good movies in at least one genre. The kids are not just all right — they’re keeping the box office afloat.