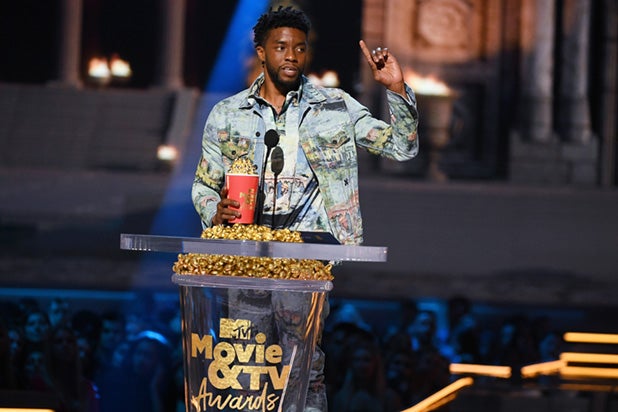 A “Black Panther” fan-favorite and three soccer superstars had viewers talking passionately on social media over the past seven days.

The Wrap has partnered with Canvs, the emotion measurement AI company, for a weekly look at some of the characters and personalities that have TV viewers the most worked up on social media. The data below covers June 13-19 and is drawn from the most emotionally reacted-to television programs, including broadcast, cable, streaming and PPV.

Of the big drivers of emotionality during the 2018 MTV Movie & TV Awards, which generated 147,644 Emotional Reactions (ERs), one standout was Chadwick Boseman. He took home two awards for his performance in “Black Panther”: Best Hero and Best Actor in a Movie. Viewers particularly loved how he gave his hero award to James Shaw Jr., the man who stopped the Waffle House gunman earlier this year.

That was so nice of @chadwickboseman to give him the award! #MTVAwards

He just gave away his award! What a man!!! Chadwick Boseman #mtvawards

How can you not love @chadwickboseman after that? Wow.

Cristiano Ronaldo was by far the biggest driver of conversation during the 2018 FIFA World Cup match between Spain and Portugal, which was broadcast on Fox and Telemundo and generated over 110,400 ERs. Although Ronaldo usually plays for Real Madrid, he joins Portuguese countrymen for the World Cup, and during the first match netted himself a hat trick, or three goals. Although the score ended up being tied at 3-3, viewers showered him with praise and adoration.

CRISTIANO RONALDO IS A LEGEND

ALL HAIL THE GOD THAT IS RONALDO.

Ronaldo is good at soccer

Two players stood out during the Germany vs. Mexico World Cup match (broadcast on Fox Sports and Telemundo with over 94,305 ERs): Javier “Chicharito” Hernández and Hirving Lozano, both on the Mexican team. Lozano managed to score the match’s only goal, giving Mexico a surprise upset victory over Germany, while Chicharito seemed to frustrate viewers over and over again.

I’ve been saying it for a few years, Hirving Lozano is a baller.

Hirving Lozano is a national treasure protect him at any cost !

Chicharito with the horrible pass