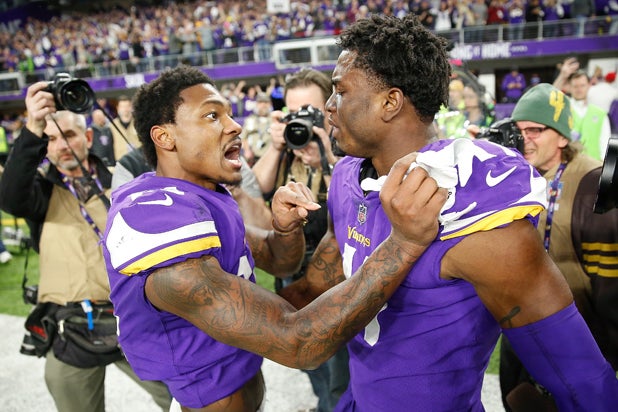 A Vikings wide receiver, the latest bachelor and a “Stranger Things” fan favorite had viewers talking passionately on social media over the past seven days.

The Wrap has partnered with Canvs, the emotion measurement company, for a weekly look at some of the characters and personalities that have TV viewers the most worked up on social media. The data below covers Jan. 10-16 and is drawn from the most emotionally reacted-to television programs, including broadcast, cable, streaming and PPV.

The New Orleans Saints vs. Minnesota Vikings football game, broadcast on Fox, was a nail-biter that came down to the last seconds and inspired 420,403 Emotional Reactions (ERs), making it the most reacted-to program on TV during the period measured. During the final play of the game with mere seconds on the clock, Vikings wide receiver Stefon Diggs made a 61-yard touchdown to bring his team to victory. Simply put, people went absolutely nuts and the positive messages for Diggs poured out over social media.

STEFON DIGGS so legendary for that

STEFON DIGGS YOU ARE MY HERO

Also Read: 'The Bachelor:' Winning the First Date Rose Might Not Be as Good as You Think

The most recent episode of “The Bachelor” on ABC inspired 25,968 ERs and the main man himself, Arie Luyendyk Jr., was the most-mentioned. Unfortunately for him, much of the discussion leaned toward the negative, with viewers complaining that he’s boring, lame and in some cases a little creepy. But that isn’t necessarily bad news for ABC — as we’ve mentioned before, “hate-watching” is a sport in and of itself and when it comes to reality TV, it can be a big driver of conversation.

Arie is such a dork ???? #TheBachelor

Arie is kinda a jerk #thebachelor

David Harbour was the most-mentioned celebrity during the 23rd Annual Critics Choice Awards (26,588 ERs), which aired on The CW on Jan. 11. The “Stranger Things” star was awarded Best Supporting Actor and gave an inspiring acceptance speech that applauded his “sparring partner” Millie Bobby Brown. Fans lapped it up, sending messages of congratulations and adoration across the Twittersphere.

DAVID HARBOUR IS SO /POWERFUL/

Just real fast, I’m not a critic, I have no say in any of these things, but David Harbour is so gosh darn good on STRANGER THINGS. It’s a sometimes quiet but strong, subtle, intense, heartfelt portrayal and I am really happy he was recognized for it tonight.

David Harbour’s speech was so beautiful. He truly realized and encaptured his supporting role as Hopper. I’m so glad he won!