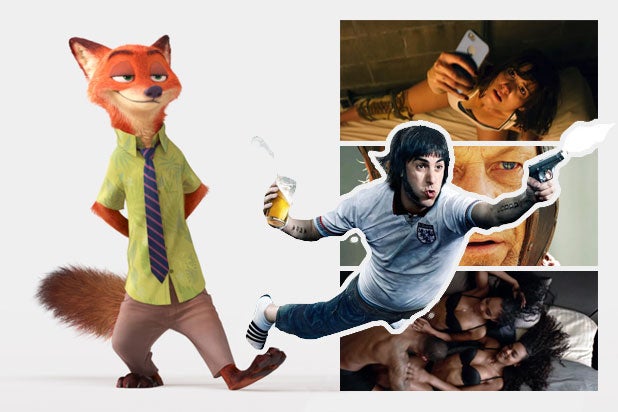 Sci-fi thriller “10 Cloverfield Lane” is the strongest of a quartet of wide-opening movies this weekend, but none are expected to come close to Disney Animation’s record-breaking family hit “Zootopia.”

A second week in the $40 million range is what the analysts see for “Zootopia,” which will be plenty to hold off “10 Cloverfield Lane.” They say the J.J. Abrams production could hit $20 million, while projections have Sacha Baron Cohen‘s British spy spoof “The Brothers Grimsby” pulling in $10 million, faith-based drama “The Messiah” coming in under $10 million and Lionsgate’s romantic comedy “The Perfect Match” generating less than $5 million from roughly 800 theaters.

Critics and young audiences have taken to “Zootopia,” a clever and insightful parable on race and prejudice set in the animal kingdom from directors Byron Howard and Rich Moore and screenwriter Jared Bush, who co-wrote with Phil Johnston. With a stellar 99 percent “fresh” Rotten Tomatoes rating, it debuted to $75 million last weekend, the best ever for an animated movie in March. With its “A” CinemaScore and the kiddie field largely to itself, there’s no reason to think it will slow significantly.

Despite its title, Paramount Pictures’ “10 Cloverfield Lane” isn’t a sequel to the 2008 breakout hit “Cloverfield,” which was also produced by Abrams (“Star Wars: The Force Awakens”).

Director Dan Trachtenberg‘s feature film debut was called “The Cellar” when it was in the script stage in 2014. It subsequently became “Valencia” and then took on its current title, evolving into what Abrams has called a “blood relative” or “spiritual successor” to “Cloverfield” during its development at the producer’s Bad Robot Productions.

The PG-13-rated tale, which has a budget in the mid-teen millions, hasn’t been reviewed yet, but its social media profile is comparable to that of “Project Almanac,” another low-budget sci-fi thriller from Paramount that debuted to $8 million last year. It will open in around 3,200 theaters.

“The Brothers Grimsby” is Sacha Baron Cohen‘s first appearance on the big screen since “Les Miserables” in 2012.

The Sony Pictures Entertainment release appears unlikely to match the openings of Baron Cohen’s two most recent R-rated comedies “Bruno,” which debuted to $30.6 million in 2009, or “The Dictator,” which rolled out to $17 million in 2012.

It sits at a weak 49 percent on Rotten Tomatoes and hasn’t done especially well on its home turf the U.K., grossing a little more than $5 million since opening on Feb. 26. It will debut in roughly 2,000 theaters.

“The Young Messiah” is a faith-based family film from Focus Features with an intriguing premise that explores the childhood of the young Jesus.

Adam Greaves-Neal stars in the film directed by Cyrus Nowrasteh, who co-wrote the screenplay with his wife Betsy Giffen Nowrasteh based on a novel by Anne Rice.

Focus has backed the film with screenings for faith leaders and organizations across the country. Director Nowrasteh also spoke to the National Religious Broadcasters convention in Nashville and Columbus appeared on “The Today Show.”

It may be working. The film’s social media profile is just below that of “Risen,’ the faith-based drama that debuted to nearly $12 million last month. It will premiere in roughly 1,750 theaters.

Terrence J, Cassie Ventura, Lauren London and Paula Patton star in the film, which is based on a screenplay by Dana Verde and written by Brandon Broussard and Gary Hardwick.