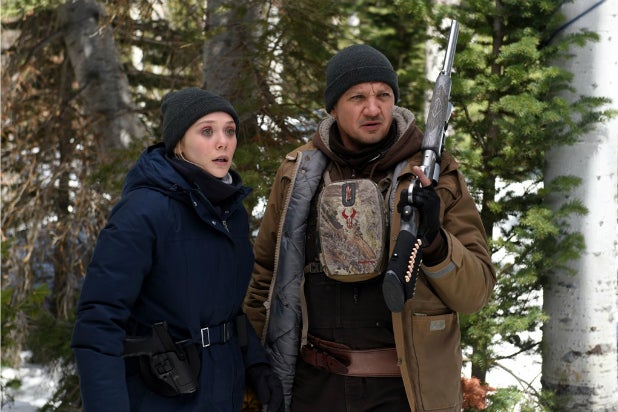 “Wind River” is the kind of well-acted, sharply-written, low key murder mystery that could easily slip under the radar of summer moviegoers. Don’t let the buzz about glam blonde spies or unearthly towers distract you. This snowbound and absorbing genre thriller should not be missed.

With its chilly, atmospheric and convincing story, “Wind River” has the feel of a richly immersive novel. It’s not perfect: A jarring flashback in the third act undermines the sense of simmering mystery. But the mood is tense, the characters are well-drawn and director-screenwriter Taylor Sheridan has crafted some of the best dialogue of any movie this year.

Sheridan, who wrote last year’s excellent “Hell or High Water” and 2015’s absorbing “Sicario,” makes his directorial debut here. He’s still a better writer than director, but it’s a strong, assured start, marked by a subtle hand. Sheridan, who started out as an actor (“Sons of Anarchy,” “Veronica Mars”), has ably crafted a compelling modern-day western with a powerful sense of place.

Jeremy Renner’s Cory Lambert sets a grim tone early on. Our first sighting of him is just after he has shot a pair of majestic wolves menacing a flock of sheep. It’s all in a day’s work for Lambert, a U.S. Fish and Wildlife officer who tracks predatory animals and refers to himself as a hunter. His hard-bitten character’s marksmanship is notable.

Renner is terrific as a mournful, flinty, divorced dad. He’s alone and resigned, but not depressed, and he’s on decent, if guarded terms with his Native American ex-wife Wilma (Julia Jones, “The Ridiculous 6”).

The tale — which opens with a familiar “Inspired by actual events” title card — builds around the mysterious death of an 18-year-old Native American woman, found in a remote corner of Wyoming’s frigid Wind River reservation. As Lambert is tracking a mountain lion spied on the reservation, he stumbles on the corpse of Natalie (Kelsey Asbille), lying frozen and inexplicably barefoot in the snow. She’s miles from nowhere and the mystery of her death, and apparent beating and rape, is why the FBI is summoned. Murder on an Indian reservation is under federal jurisdiction.

As he did in “Hell or High Water,” Sheridan gives us a more vivid sense of the men in the story than the women. Sadly, women here are depicted primarily as victims of the men that surround them. Renner’s character is not above mansplaining to a seemingly competent FBI agent (Jane Banner, played by his “Avengers: Age of Ultron” co-star Elizabeth Olsen), whose main failing seems to be her unfamiliarity with the remote locale.

The setting is isolated, and the inhabitants of both the reservation and the nearby town are given to terse exchanges and wry grimaces rather than smiles. Mountains and forests outnumber buildings. The native inhabitants and Lambert have a healthy respect for the inhospitable elements. Lambert dons an all-white snowsuit to camouflage himself as he tracks animals that prey on livestock. It’s intriguingly symbolic: His sadness is pure and untrammeled. and both he and his surroundings have a tragic history.

Thrust into this unforgiving terrain is federal agent Banner, a Ft. Lauderdale native who responds to the call from her post in Las Vegas. (Apparently no one is stationed closer.) Jane’s unwavering sense of justice, empathy and calm bravery overrides her fish-out-of-water status.

The reservation is just a few hours from the ritzy resort town of Jackson Hole, but it might as well be another country. Sheridan explores the socio-economic deprivations of the area, as well as the clashing jurisdictions between local law enforcement, the feds and reservation officials.

As the investigation of Natalie’s death unfolds, we learn the source of Lambert’s anguish. The film is suffused with a desolate sensibility and a somber rendering of marginalization. Nearly everyone in this tale feels forsaken. Young native men turn to drugs and regard prison as a rite of passage. White men working nearby are frustrated, embittered and frequently drunk. They talk a lot about leaving, usually for a sunnier climate. Still, they stay. The film’s themes — grief, resignation, injustice — are eloquently conveyed.

Renner, Birmingham and Greene give remarkably lived-in performances. Olsen, whose talent was made powerfully apparent with her breakout film, 2011’s “Martha Marcy May Marlene,” does a fine job but, given her wide-eyed ethereal quality, she seems an unusual casting choice. (It’s easier to envision a Frances McDormand type in the role.) In a few scenes, it appears the story might cave to include a romantic entanglement between Banner and Lambert. Fortunately, the film’s distinctive chill is not about to thaw, though there is an endearing low-grade chemistry between Renner and Olsen.

Nick Cave and Warren Ellis’s haunting musical score is starkly evocative, intensifying a lean, compelling and deeply-felt crime thriller that illuminates even as it chills.