2005: Here was Chris Rock, hosting the Oscars: “I remember one year when Halle Berry won the Oscar, Nicole Kidman was smiling so wide, she shoulda won an Emmy at the Oscars for her performance.” 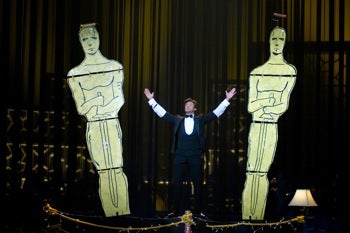 2009: Hugh Jackman, hosting the Oscars, wins an Emmy at the Oscars for his performance.

Actually, the true Emmy winners were the writers of Jackman’s opening number, rather than Jackman himself. (For the record: William Ross, John Kimbrough, Dan Harmon, Rob Schrab and Ben Schwartz.)

Personally, I think Jackman deserves some kind of award for having the nerve to introduce a production number with lines like “everything is being downsized because of the recession,” and “because of cutbacks, the Academy said they didn’t have enough money for an opening number” – and then pull off that allegedly cut-rate production number while standing beneath a three-ton, 60-foot-tall Swarovski crystal curtain made up of more than 100,000 imported crystals.

If you can stand beneath that curtain and sell a number whose premise is frugality, you deserve a mantle-ful of shiny gold statuettes.

By the way, Chris Rock also won an Emmy last night. But his didn’t have anything to do with the Oscars.