The 2017 Black List was released on Monday, featuring the best movie scripts that haven’t been made into films yet; and the big takeaway from this year’s list is that women are more present on the list then ever, both in the stories that are being told and the screenwriters who are telling them.

This year, 25 of the scripts on the list of 76 works were written by women, with 34 of those scripts featuring female protagonists. That’s a record for both categories, up from 18 screenwriters and 28 protagonists last year. This includes the No. 2 script on the list, “Let Her Speak,” a biopic about Texas State Sen. Wendy Davis and her 24-hour filibuster to protect abortion clinics in the Lone Star State. It also includes “Daddio,” Christy Hall’s script about a taxi driver who talks about relationships with a passenger while driving from the airport in New York. 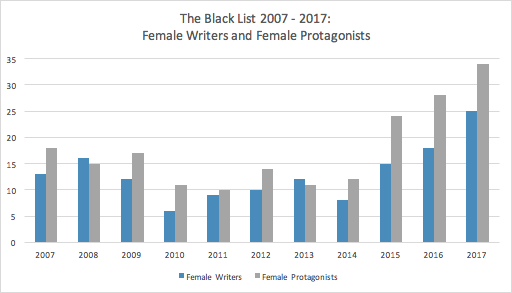 Of those 34 protagonists, five of them are assassins. Among those is “Ballerina,” a script by Shay Hatten that was bought by Lionsgate and is currently being considered for a retool so it can become a spin-off for the studio’s hit “John Wick” action series. Another one of those assassin films is “The Mother,” a script written by “Underground” creator Misha Green that has been picked up by Netflix and follows an assassin who comes out of hiding to protect the daughter she abandoned years ago.

There are also two biopic scripts written about the same topic: Jane, the underground system of abortion doctors who provided services to women before Roe v. Wade legalized abortion. One is “Call Jane,” written by Hayley Schore and Roshan Sethi, and the other is “This Is Jane,” written by Daniel Loflin and based on “The Story of Jane” by Laura Kaplan.

World War II is always a common topic on the BlackList, and this year is no exception with six films, including the top film on the list, “Ruin.” Written by Matthew and Ryan Firpo, the film follows a nameless Nazi captain who tries to atone for his crimes by hunting down his former SS compatriots.

And as “The Post” gains more and more Oscar buzz in the era of “Fake News,” you should probably keep an eye on two scripts about journalism at its best and worst: “American Tabloid,” Adam Morrison’s story about the rise of the National Enquirer, and “Newsflash,” Ben Jacoby’s look at Walter Cronkite’s newsroom at CBS on the day of the Kennedy Assassination. “Newsflash” is being produced by former Warner Bros. production head Greg Silverman and just signed on Seth Rogen to play Cronkite.