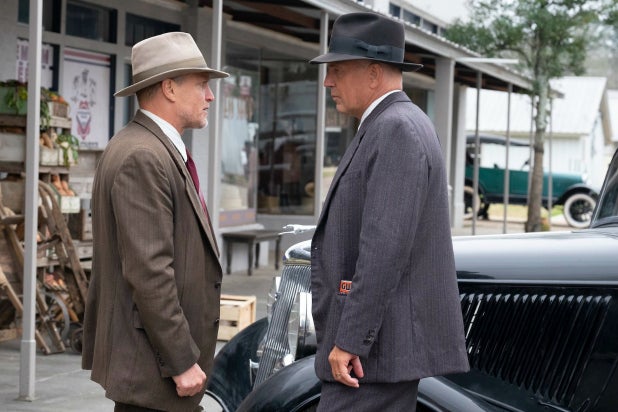 Netflix announced on Monday that its upcoming film, “The Highwaymen,” starring Woody Harrelson and Kevin Costner will debut on the platform on March 29, 2019.

The film directed by John Lee Hancock (“The Blindside”) follows the untold true story of the legendary detectives who brought down Bonnie and Clyde, during a time when outlaws made headlines and lawmen made history.

When the full force of the FBI and the latest forensic technology aren’t enough to capture the nation’s most notorious criminals, two former Texas Rangers (Kevin Costner and Woody Harrelson) must rely on their gut instincts and old school skills to get the job done, according to Netflix’s description.

The outlaws made headlines. The lawmen made history. From director John Lee Hancock, #TheHighwaymen follows the untold true story of the detectives who brought down Bonnie and Clyde. On March 29, @modernwest and @WoodyHarrelson unite for the first time on screen! #NetflixNewsWeek pic.twitter.com/kRxZVgMUHU

“The Highwaymen” will mark the first time Costner and Harrelson have worked together on screen. Costner was last seen in Aaron Sorkin’s Academy Award-nominated “Molly’s Game,” starring Jessica Chastain. Harrelson, who had a brief cameo in Sony’s “Venom,” last starred in “Solo: A Star Wars Story” for Disney, and he was nominated for best supporting actor for his role in “Three Billboards Outside Ebbing, Missouri.”

Also Read: 'Venom' Mid-Credits Scene Explained: What You Need to Know About Woody Harrelson and Carnage

The story of Bonnie and Clyde is infamous. The two outlaws were most famously portrayed by Faye Dunaway and Warren Beatty in 1967.

Chloë Grace Moretz and Jack O’Connell will also play Bonnie and Clyde in a new film by Kike Maillo called “Love Is a Gun.”

That film is based on “Go Down Together: The True, Untold Story of Bonnie and Clyde” by bestselling author Jeff Guinn. Oscar nominee Shelton Turner (“Up in the Air”) wrote the screenplay, while Johnny Newman (“Narcos”) added revisions. “Love Is a Gun” follows the emotional story of two of history’s most famous lovers.