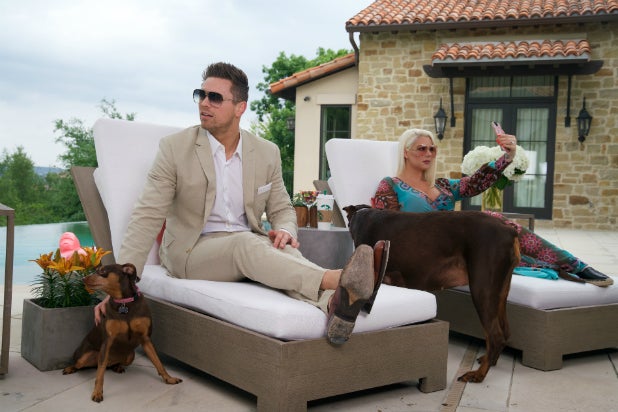 “I also look at it as a ‘Curb Your Enthusiasm,’ an ‘Office,’ a ‘Modern Family,'” Miz said, imploring us to not focus on what’s real and what is set up for the cameras.

OK, we’re interpreting that as an admission that a lot of “Miz & Mrs.” plot points are fake. (Perhaps like on Episode 1 when bad cellphone reception leads Miz to walk into a non-nude photoshoot totally naked?)

We suppose that’s fair, considering both Miz and his wife/co-star Maryse both come from the professional wrestling world, where the line between what’s real and what’s not is blurry at best. It’s also fairly refreshing to hear the honesty, as “Miz & Mrs.” is hardly the first reality show to stretch the word “reality” to the very edges of its definition.

“It’s really a comedy,” the recent WWE Intercontinental Champion summed up his about-to-debut docuseries. “That’s what we set out to do — to make people laugh. Turn off your brain and just relax and laugh.”

Also Read: Why WWE's The Miz Worked So Hard to Get New Daughter Monroe Sky's Name Over

If anyone knows how this stuff works it is the Mizanins. Mike got his start on “The Real World,” while his bride began on WWE reality competition “Diva Search,” which sought to identify new female wrestling talent for the company. Mike was a judge on that one, which is how the two met.

Considering the married couple has lived pretty much their entire adult lives in the public’s eye via television, is anything off-limits for this show? Pretty much just changing diapers on their new baby girl, Monroe Sky, per Miz.

“Since we are executive producers, we have a say in everything,” he said.

So yeah, you’ll only get the parts of their “real” life that “WWE’s most must-see Superstar” and his Mrs. want you to see — but much like Mizanin’s weekly “Miz TV” segments on “SmackDown Live,” that should still prove quite entertaining.