Republican representative Joe Wilson’s outburst during President Obama’s heathcare speech to a joint session of Congress Wednesday night did more than upstage the president and rattle what was supposed to be an otherwise routine address. It created nothing short of a media maelstrom.

Here’s a rough guide to the media reaction:

John McCain appeared on Larry King Live, calling Wilson’s outburst "totally disrespectful… no place for it in that setting or any other and he should apologize immediately."

Senator Joe Biden made the morning talk show rounds, telling Good Morning America: "I was embarrassed for the chamber and a Congress I love … It demeaned the institution."

Some lawmakers took to Twitter. Sen. Claire McCaskill (D-Missouri): "Biggest disappointment of evening, the total lack of respect shown by one member for the President. Never acceptable to behave like a jerk."

The Wall Street Journal noted that Wilson’s Democratic opponent in the 2010 mid-term elections has raised about $100,000 from 3,000 people following his outburst, according to a spokeswoman for the House Democrats’ campaign operation.

Web surfers seeking the answer to the “Who is this clown?” question were sorely disappointed. Wilson’s House of Representatives-hosted website went “down for maintenance. Please check back again soon." (UPDATE: A note on the site now reads, "Due to exceptionally high traffic, this site is temporarily unavailable.")

Wilson’s Wikipedia entry was updated and swiftly scrubbed of a pair of expletives before its editing functions were disabled due to what Wikipedia called "vandalism.:

Gawker, however, offered a field guide to Wilson, a “a histrionic right-winger who loves racists!”

As Politico’s Patrick Gavin noted, the URLs JoeWilsonIsALiar.com, ImpeachJoeWilson.com, DefeatJoeWIlson.com were snapped up last night. My favorite, though, is JoeWilsonIsYourPreexistingCondition.com, is already operational.

Oh, and where are the Joe Wilson t-shirts, you ask? They’re already here.

Meanwhile, as you would expect, cable news had a field day. The morning papers, however, were surprisingly subdued. The Washington Post was the only major paper to point out Wilson on its cover: 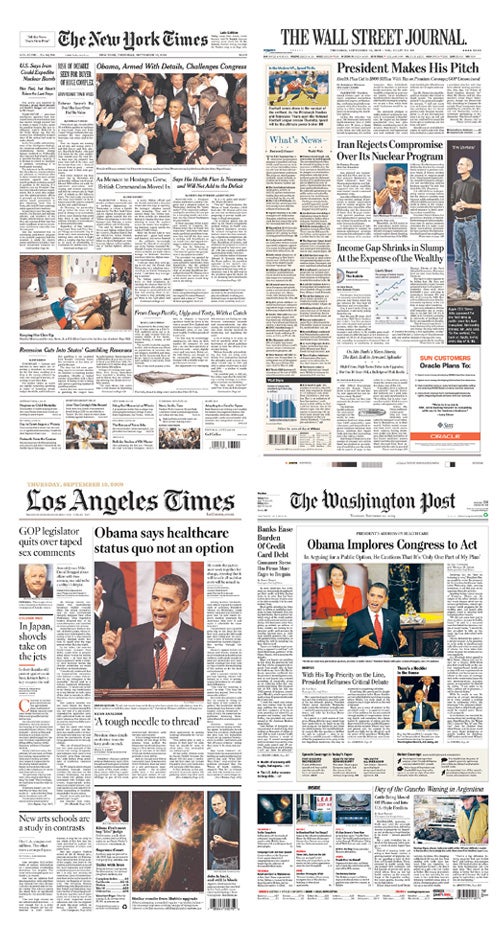 Even in Wilson’s home state of South Carolina, just one – Columbia’s The State – ran a photo of Wilson’s finger-pointing. 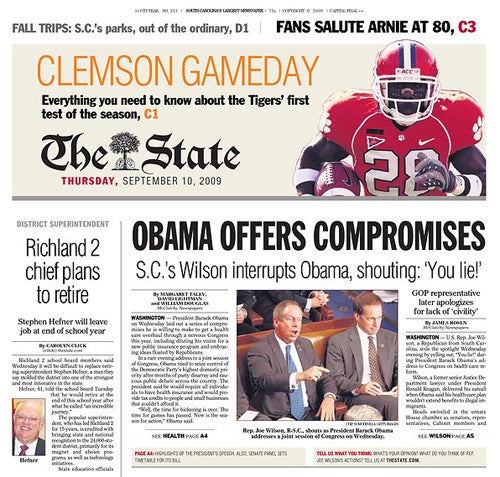 [* By Thursday morning, Wilson had been knocked to number three on Google, behind “colloidal silver” and “leslie oudin” – mother of the U.S. Open’s surprising quarterfinalist Melanie Oudin alleged to have had an affair with her daughter’s coach.]