Critics of the digital era often argue that the deluge of new technology evolving daily is driving us to become more insulated as individuals — but what if the Internet is actually forging a new era of relationships?

In fact, online video sites like YouTube are allowing us to become "producers," remaking our own identities and relating to others in the community in an entirely different way, says Mike Wesch, a cultural anthropologist who studies the effects of social media and digital technology on global society at Kansas State University. (Watch a video from the presentation here.) 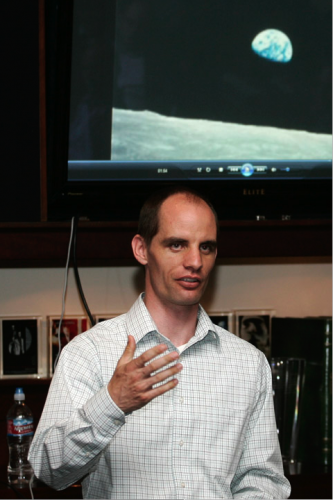 As examples, Wesch (photograph at left by Jonathan Alcorn) played videos like "Charlie bit my finger," the "Numa-Numa" guy and the "Soulja Boy" dance that have moved beyond entertainment to become social phenomenons. Various remix versions, spoofs of and responses to the popular videos were shown as evidence of the notion that YouTube is encouraging new forms of connectivity.

Wesch spoke to members of Hollywood community at events held by TheWrap at both the Four Seasons and movie producer Peter Guber’s Bel-Air home on Thursday. (See slideshow.)

Wesch used one of his own videos to highlight how something one makes for no money at home — in his case, "Web 2.0 … The Machine is Us/ing Us," made in a basement in Kansas with a "sub-$1,000 laptop" — can go on to make cultural waves.

Wesch created the geek-oriented video in January and watched as it went from 200 views to several million, thanks to websites like Digg and links in a few blogs, to staying in the number-one position for four months on social bookmarking site Technorati. Despite being posted just before the eve of the Super Bowl, it quickly gained traction as users — without realizing it — were increasing the online rating of his video accidentally by linking to it on other websites.

The professor said his summer journeys to New Guinea, where he lives in a remote village and studies the native people, only further exemplified how much technology connected him to others. 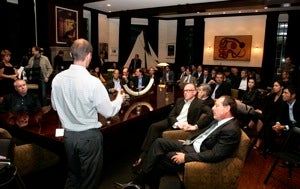 Unable to communicate in the native language, Wesch felt completely isolated. He said it made him realize how much we depend on conversation, clothing and gestures in the U.S., whereas abroad, identities are completely formulated from face-to-face relationships.

"I realized that media are not tools or modes of communication, but that media mediates relationships," he said.

Back in Kansas, he brought to his classroom Robert Putnam’s book "Bowling Alone," which chronicles the death of the corner grocery store and the simultaneous rise of chain stores and sprawling suburbia. Ultimately, Putnam says, people are more isolated than ever — and yet they still strive for connectivity. Meeting in electronic forums is not the same as meeting in a bowling alley, Putnam claims.

To test that theory, Wesch had his students interact with one another through videos of themselves talking to webcams, which they uploaded to YouTube. What they found — beyond the fact that talking to a camera alone often can be awkward — was that physical distance and the anonymity of watching other people can create a rare dialogue: connection without constraint.

Online, we have the freedom to create characters, blurring the lines between the reality and fiction of our personas. We also have the ability to more closely observe the actions of others than in real life. And because we can go back and watch the videos we produce, we learn not just what it’s like to talk, but to be seen.

Wesch believes the web’s lack of boundaries are shifting self-identity. We can no longer erase what’s come behind us once it has been documented, and this can have both a positive and negative effect.

Once we are captured on camera doing something, it is there forever — and may come back to haunt us later (which, he said, seems of less concern to the younger generation). On the other hand, we can become our own public-relations agents, shaping the persona we want the world to see. 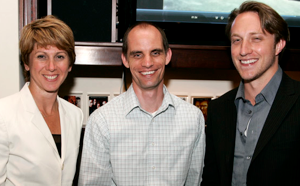 He concluded by showing a clip from "Hunt for Gollum," a high-quality prequel to the "Lord of the Rings" franchise made by 140 volunteers for a mere $5,000. Will that type of activity ultimately eclipse moviegoing, asked one audience member?

"I don’t think so," said Wesch, "People like the experience of watching movies together. Now they’re watchiing YouTube films in the movie theaters as well as feature-length films."

But even Chad Hurley, the CEO of YouTube who was in the audience at the event, chimed in to say he believes televisions and movie theater screens hold a power YouTube will never be able to possess.

"People in a dorm might suffer through watching things on their laptop, but that’s really not the best way to experience long-form content," Hurley (pictured above, with Wesch and TheWrap Editor-in-Chief Sharon Waxman) said. "Still, YouTube can offer a way for people with lots of talent to show off their content. People appreciate good art and stories, and a lot of people participating on the site are the cream of the crop."

The event was sponsored by Google-YouTube and OTX Research.