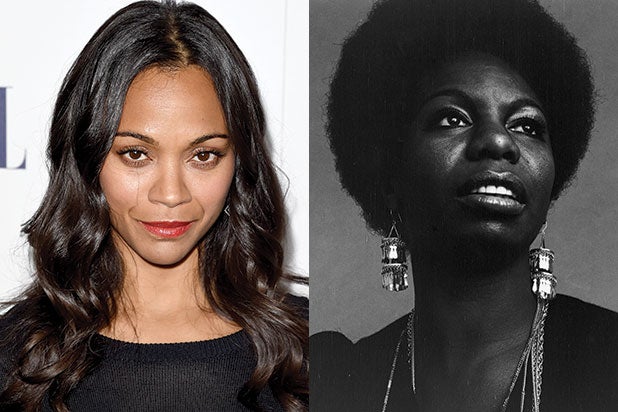 Zoe Saldana‘s casting as Nina Simone in “Nina” is once again causing outrage, after the official poster for the film was released Tuesday.

Fans took to Twitter to point out that Saldana looks nothing like Simone, the legendary African-American singer-songwriter and civil rights activist whose struggles to balance music, family and what she believed in left her living alone in France, feeling exiled from her own country.

“Zoe Saldana looks nothing like Nina Simone #FAIL not even close,” tweeted one user. “Why not just Will Smith to do it?”

“That Zoe Saldana pic as Nina Simone looks like the blackface of a bad Halloween or frat party,” another user wrote.

Some even compared the bad casting to that of Joseph Fiennes being hired to play Michael Jackson in a British television special, which also caused outrage back in January. Other Twitter users also suggested actresses who would’ve been a better fit for the role, which include Lupita Nyong’o and Viola Davis.

In 2012, rumors circulated that Saldana would play Simone, and the response was overwhelmingly negative, with fans saying that Saldana was too light-skinned to portray the singer. In 2014, an image was released in which Saldana’s nose had been altered with a prosthetic. Many took to Twitter to suggest that Saldana’s casting was a form of blackface.

Zoe Saldana playing Nina Simone. Is she the best actress for this role? https://t.co/iOTmktu6tw pic.twitter.com/lez4tjkctq

Zoe Saldana looks nothing like Nina Simone #FAIL
not even close. Why not just get Will Smith to do it.

Zoe Saldana isn't even that good of an actress to be pressed to cast …. They could've castes a darker woman

i love Nina Simone, as well as Zoe Saldana, i think they could've picked someone else to play Nina, instead of painting Zoe darker WTF

That Zoe Saldana pic as Nina Simone looks like the blackface of a bad Halloween or frat party ????

So many talented dark-skinned actresses out there. No excuse for spray on melanin on Zoe Saldana. https://t.co/BJBpuVTuSu

I like zoe saldana. but an afro-latina that denys her blackness has no business playing an unapologetic, pro-black singer/activist.

QUESTION: Why did they DARKEN Zoe Saldana rather than cast a darker actress since it was such a crucial part of Nina Simone's story?

casting directors went out of the way to not cast a dark-skinned bw. so many dark-skinned actresses w/ better acting chops than zoe saldana.

Zoe Saldana playing Nina is the CLOSEST to whitewashing without a white person. Equivalent to getting a white man to play Michael Jackson…

Just found out that Zoe Saldana is playing Nina Simone….. Who the fuck decided on this? pic.twitter.com/MlQcH70FMS

Heard rumors about Zoe Saldana playing Nina Simone years ago but I never thought it would actually happen ???? Do better, Hollywood. Do better.