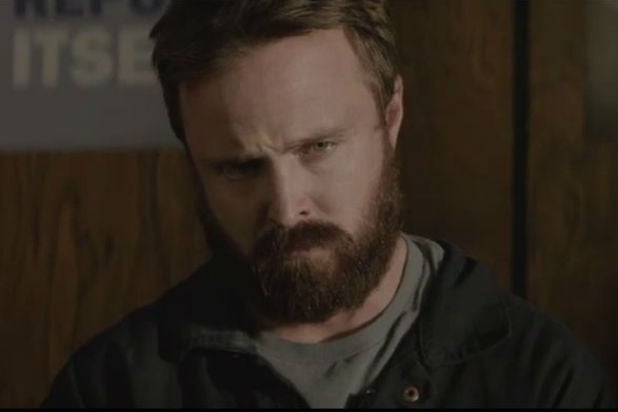 Aaron Paul is no stranger to Emmys glory — he’s twice walked away with an award for his portrayal of shiftless ne’er-do-well turned meth co-kingpin Jesse Pinkman on the AMC drama “Breaking Bad.”

With the final season of “Breaking Bad” in contention this year, time will tell if Paul can pull off a threepeat. In the meantime, TheWrap caught up with Paul to talk about this highs and lows of “Breaking Bad,” and what television shows he’d like to take on following his career-making role.

What was the toughest thing you had to do this season?
We were all personally at a point where we could see the finish line. The toughest thing I think was to say goodbye to the show, for all of us. The final eight episodes were pretty hard on all of us, it was such an amazing journey. The toughest thing was just to say goodbye to it all. I’d worked on numerous jobs before “Breaking Bad” and a handful of jobs after, and … It wasn’t just the job, it wasn’t just the story we were telling, it was the family that we just knew and loved. On-set, off-set — everyone. It was such a crazy experience. It was just such so much fun — every day, all day, we were just laughing and joking around. I think a lot of that had to do with the fact that we were fortunate enough to be on a show like “Breaking Bad,” so we were all very excited to roar into work every day, because we knew we were telling a gripping, incredible story, so we all felt very blessed. We were just like giddy little school kids on recess every day. Bottom line, is, let’s be honest: We were just spoiled. And it was great.

What was the most fun thing you had to do this season?
Honestly, for me, just to see how it was all going to end. We were all just waiting with bated breath; we could not wait to get the next script. With that said, when we got the final script on my desk, I wanted to read it so bad but then I didn’t want to read it. I had it for a solid three days before I picked it up … And also, killing Todd! Killing Todd was awesome. I’m so happy that I had to kill Todd and that Todd didn’t shoot Jesse in the back of the head to something. I would have been so upset.

Let’s assume that somebody has never seen your show. What would you say to persuade them to watch it?
It’s like no other show on television. It’s extremely dark but also very funny. I believe it’s just a beautiful piece of cinema every single week.

Let’s say you’re an Emmy voter, and you can’t vote for yourself or your show. Who’s at the top of your ballot?
I’m obsessed with “It’s Always Sunny in Philadelphia.” It’s such a phenomenal show, and I think everyone, they’re so perfect in it. I know they’ve all been friends for many years. but they just really shine on screen. “It’s Always Sunny,” I would definitely put up there. And of course I love “House of Cards.” I love “True Detective.” Man, there’s just such incredible television right now.

If you could play any other role on another show, what would it be?
Man, I would love to have a stint on “It’s Always Sunny.” to be honest. I think it would be so much fun. It would be nice to do something a little bit more light-hearted, and not so intense. Which, nothing against that — I have so much fun doing the intense side of things — but I would love to go to work and just do the stuff that they do on that show. Or the stuff that they do on “Veep.” Or, I wouldn’t mind having an amazing arc on the next “True Detective.” Let’s be honest.

What was the last TV show you binge-watched? How many episodes did you see in a sitting?
It was “True Detective.” I actually just watched the final episode close to two weeks ago, and I watched the entire season other than the final episode in two sittings. I was just in such a crazy headspace.