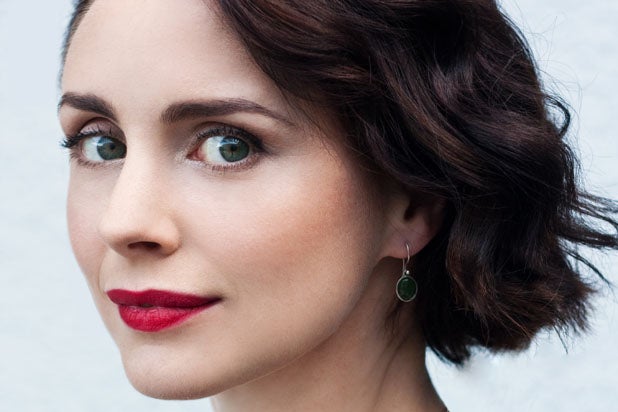 “Over but not done,” reads the slogan for AMC’s “Breaking Bad” Emmy campaign. After winning two statues at the 2014 Golden Globes, the series is on track to snag multiple nominations.

Continuing with our Emmy contenders series, TheWrap spoke with “Breaking Bad” star Laura Fraser, who plays the methylamine supplying Lydia. The Scottish actress may receive her first Emmy nomination as Outstanding Supporting Actress in a Drama Series for her portayal of the always-on-edge character.

In our conversation, Fraser talked about Lydia’s signature Louboutin heels, “Veep” star Julia Louis Dreyfus, and her desire to play Joffrey on “Game of Thrones.” She also weighed in on what she’d choose as her Emmy episode and getting a gun to the head.

Spoiler alert! Do not continue reading if you don’t want to know what happened to Lydia on “Breaking Bad.”

1. What was the toughest thing you had to do this season?
Die a painful death!

2. What was the most fun thing you had to do this season?
Trying to keep a straight face while Lydia’s Louboutin’s sank into the desert sand after emerging from the underground meth lab post-massacre.

3. Let’s assume that somebody has never seen your show. What would you say to persuade them to watch it?
I would never try to persuade someone to watch something I was in!

4. You’re an Emmy voter. You can’t vote for yourself or your show. Who’s at the top of your ballot?
I loved “Orange is the New Black” Season 1, and “Veep,” and “Girls.” Julia Louis Dreyfus is an incredible actor; I have so much admiration for her.

5. If you could play any other role on any other show, what would it be?
I would love to have played Joffrey on “Game of Thrones”! Jack Gleeson was astounding, but it would be so much fun to play.

6. What was the last TV show you binge-watched? How many episodes did you see in a sitting?
“Game of Thrones,” three episodes per night!

7. If you get nominated, what will you pick as your Emmy episode?
I don’t know … #502 (“Madrigal”) maybe? Lydia has a scene with Mike in the diner and tells him to bump off eleven men just for her peace of mind! Then later in that episode, he holds a gun to her head and she tells him not to shoot her in the face. Classy.

8. Is this the Golden Age of Television?
It’s a lovely time to be working in television. There are so many brilliant people working in TV at the moment, and the quality of the writing is astonishing.