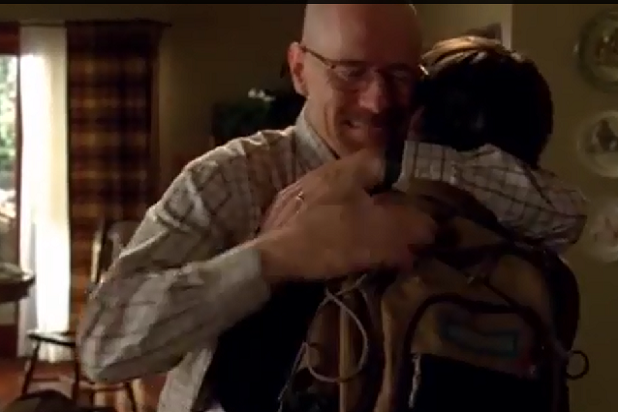 “Breaking Bad” baddie Walter White probably won’t be getting a “World’s Greatest Dad” mug for Father’s Day this year (because of, you know, the whole dying-in-a-hail-of-bullets thing — or did he?).

However, he has received a loving Father’s Day tribute from his TV son.

R.J. Mitte, who played Walt Jr. on the AMC drama, sings his meth-slinging small-screen pop’s praises in a new video.

In the video, Mitte hails White as “a great man” who went above and beyond for his brood, even if it meant coloring outside the lines with a crystal-blue crayon.

“A lot of fathers say they would do anything to provide for their family, but you, Walter White, really meant anything,” Mitte intones in the video “Be it cook meth, poison a child, or choke a man named Crazy 8 with a bike lock.”

And, while Mitte admits he was jealous about the amount of time that his TV dad spent with his partner in crime Jesse Pinkman, the actor at least allows that “you never let my girlfriend choke on her own vomit.”

“Most dads tell lame knock-knock jokes, but you — you were the one who knocked,” Mitte says as his tribute ramps up to a heart-in-throat finale. “And for that, we all thank you and wish you a happy Father’s Day.”

Sniff; is it getting dusty in here?

Watch the tribute below.