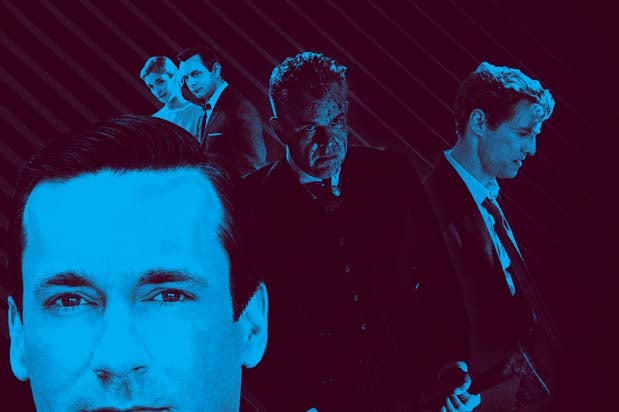 A version of this story originally appeared in EmmyWrap: Secrets of the Comedy Ingenues.

Don Draper said it in the first season of “Mad Men”: “The most important idea in advertising is new.”

Newness is effective in Emmy campaigns, too. It helped “Mad Men” win the Emmy for Outstanding Drama Series in each of its first four seasons. But Matthew Weiner’s masterpiece has just wrapped the first half of its two-part final season. Impossible as it may seem, it is the oldest of this year’s top Emmy contenders.

The newcomer is “True Detective.” It isn’t flashy — Nic Pizzolatto’s Louisiana murder mystery has the same moody early ’90s atmospherics as “Silence of the Lambs” or “Twin Peaks” — but it does have freshness on its side. And it has the other thing Emmy voters love: movie stars. Matthew McConaughey is up for best dramatic actor on TV the same year he won an Oscar for “Dallas Buyers Club.”

TV has learned to keep its cool when big-screen stars and even Oscar winners stop in for a while, but this is the first time an actor has starred on a television show at the same time he’s the most celebrated film actor of the year. (If he wins an Emmy, he’ll be the first man, and the fifth person of either sex, to win the top acting Oscars and Emmys in the same year.)

McConaughey is the man to beat in this year’s lead dramatic actor category, and not just because of his Oscar. His turn as the alcoholic, hallucinating, ultimately heroic Rust Cohle would have stayed in viewers’ minds even if he had been an unknown. His biggest competition might just be his co-lead, Woody Harrelson.

FX CEO John Landgraf has questioned whether it’s fair that “True Detective” — an anthology that will feature a new standalone story each season — is competing in the drama categories against shows that tell one story over several seasons. Landgraf noted that anthology FX shows like “American Horror Story” are competing in the Outstanding Miniseries category and observed that standalone seasons can draw actors like McConaughey whose agents would never let them commit to years of television.

But there is an upside for FX to HBO’s decision to enter “True Detective” as a drama: The Outstanding Miniseries category will be easier for the other entries without it, in a year in which its contenders will also no longer be lumped in with and competing against made-for-TV movies.

Other top drama contenders include Showtime’s “Masters of Sex.” It didn’t become the cultural phenomenon that “True Detective” did, but the 1950s drama about sex researchers Masters and Johnson has some of “Mad Men’s” mix of subtlety and swagger. Leads Michael Sheen and Lizzy Caplan may not be as famous as McConaughey and Harrelson, but they have committed to their show for its entire run. And Emmy voters do like their period dramas.

But they don’t just vote for shows from distant decades. Even when Don Draper was telling his clients about the power of new, he told them that one thing was even more powerful: nostalgia. “There’s the rare occasion when the public can be engaged on a level beyond flash, if they have a sentimental bond with the product,” he said.

In Emmy terms, that means voters sometimes award an entire body of work at the end of a series, as they did when they gave the Outstanding Lead Actor in a Drama Emmy to Kyle Chandler after the last season of “Friday Night Lights.” It was a way of honoring both him and his show for five great seasons.

But nostalgia may not be as strong this year as in past years, because only one of the big drama contenders finished its run during the eligibility period — and the Emmys already recognized it last year. The final episodes of “Breaking Bad” were airing just as voters handed out their awards, and it deservedly took home the prize for Outstanding Drama Series then.

That was for the first half of the final season. The second half, which is eligible this year, was even better than the first. It was one of the best seasons, or half-seasons, of television ever made. But it won’t be fresh in viewer’s minds, because it ended almost a full year before this year’s ceremony. And voters may not feel the need to recognize stars Bryan Cranston and Aaron Paul again, because Cranston already won Outstanding Lead Actor in a Drama Series three times, while Paul won twice in the supporting category.

Worthy as the final episodes of “Breaking Bad” were, Emmy voters may feel as if they’ve already given Vince Gilligan’s show the respect it deserves. And while they will surely be nostalgic for “Mad Men” after its final episodes, they won’t have to deal with those feelings until next year, since AMC also split its final season. Emmy voters will get another chance in 2015 to recognize leads Jon Hamm and Elisabeth Moss, neither of whom has ever won in the lead acting categories despite numerous nominations.

Voters will also get one more chance to give an Outstanding Drama Series award to HBO’s “Boardwalk Empire,” a devastatingly good drama that wraps its fifth season this year.

It remains to be seen how voters will respond to very bold decisions by CBS’s “The Good Wife” and Showtime’s “Homeland” to kill off major characters. But if Emmy voters like dramatic deaths, they could do no better than HBO’s “Game of Thrones.” Recognizing it in the Outstanding Drama Series category would be a way of striking a balance between newness and nostalgia. The fourth season of the HBO series has been brilliant. Though Peter Dinklage has won before for Outstanding Supporting Actor in a Drama Series, the show has never won best drama. It may be time.

Emmy voters are famously dismissive of genre shows, and “Thrones” certainly looks like one. (It’s arguable whether it is a true fantasy or a critique of them.) If the earthbound “True Detective” and “Breaking Bad” cancel each other out, the soaring “Thrones” could snag the crown.

In the Outstanding Comedy Series category, meanwhile, TV Academy members will definitely have the opportunity to indulge in their love  of the new. Because of the timing of their ceremonies, Golden Globes voters got to hand the first major awards to Fox’s excellent new “Brooklyn Nine-Nine” before Emmy voters got to pass judgment: Andy Samberg won for lead comedic actor at the Globes, and the show won best comedy. The Emmys could join the bandwagon, just as they did when they recognized the first season of “Homeland” first season after the Globes did.

Or they could go in another direction. Mike Judge’s new “Silicon Valley” is earning better ratings for HBO than its acclaimed comedies “Veep” and “Girls,” and its puncturing of the dot-com bubble has earned wide praise. Or ABC’s “Modern Family” could win yet again, after claiming the prize for every one of its first four years. Would that be a win for continued excellence? A win for nostalgia? Or both?

FX’s “Louie” should be a contender as well. The fourth season has been the most challenging, but also the most ambitious. When it debuted, it was too new and strange for some voters. But now they’ve had time to accept that creator/star Louis C.K. is making a comedy as serious as any drama. He won Outstanding Writing in a Comedy Series in 2012, and the next year Melissa Leo won for Outstanding Guest Actress in a Comedy Series for her work on the show.

C.K. took a year-and-a-half off between seasons. So while his show may feel more established, it also feels new.