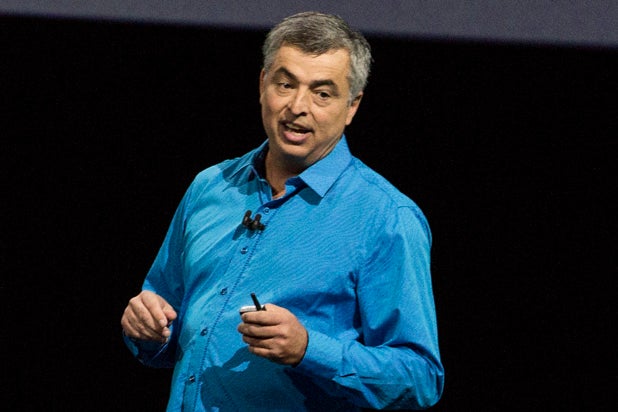 At long last, Apple has decided to enter the original content game with a “Shark Tank”-style reality show, “Planet of the Apps,” which will stream on its Apple Music service. But that doesn’t mean it’s preparing to splash its more than $20 billion in cash on a studio.

Eddy Cue, Apple’s senior vice president for internet software and services, told Recode’s Peter Kafka at the Code Media conference at the Ritz-Carlton Laguna Niguel in Dana Point, California, that the tech behemoth isn’t interested in acquiring an existing studio or production company, because it doesn’t want to create the same type of programming they already produce for other outlets.

Former NBCUniversal Chairman Ben Silverman’s Propagate Content developed “Planet of the Apps,” where developers look to convince four influential judges that their mobile app is worth investing in. Developers then work with the judges to pitch their apps to a venture capital firm, and winners earn featured placement in Apple’s App Store. While it seems tailor-made to be the first Apple Music original, that wasn’t how Silverman initially saw it.

“We took this out to pitch the traditional players and we were really focused on broadcast,” Silverman said.

But Silverman eventually realized Apple would have to be a part of it, and word of the show came to Apple Music when co-creator will.i.am had a separate meeting at the tech giant’s headquarters and started talking about other projects he was working on. Silverman said after Apple showed interest, he slowed the process with the interested broadcast parties, and ended up finding a home for it on Apple Music.

Silverman, who executive produced massive broadcast hits like “The Office” and “The Biggest Loser,” said he didn’t feel like he was missing anything by taking this one to a less-established medium.

“With Apple, the potential audience is as many screens as exist,” Silverman said.

Silverman denied that he’s sacrificing reach (although broadcast still pulls in millions of viewers and good luck finding anything resembling streaming ratings) because of Apple Music’s potential audience: anyone with a device. Plus, it’s borderless.

“This will be available in most countries in the world,” Cue said, adding later on that the show isn’t limited to U.S. developers, so it could have a second life internationally (like so many other reality shows, from “Dancing with the Stars” to “MasterChef).

But the content chief said despite the company’s nearly unparalleled resources, it’s not going to do the type of volume shopping companies like Amazon and Netflix are known for.

“We’re not out to buy a bunch of shows,” Cue said. “We’re out to be creative, move culture and do something Apple is adding value to.”

Apple Music’s video originals will be ad-free for now, and Cue didn’t imply it would be any different for the long term. He said advertisers will have to be innovative, but a three-minute interruption in the middle of a show is not the way of the future.

He’s also not a huge fan of “skinny bundles” — “given how great the content is, people should be watching more of it and willing to pay more” — and said technology can help improve TV’s flawed user experience, which isn’t an altogether surprising view from an Apple exec.

“I’ve got like 900 channels and nothing to watch,” Cue said. “Those are all problems technology can solve directly.”

However, Cue didn’t have much relief for those fans of Amazon shows who want to know when they can watch them through an Amazon app on Apple TV.

“I hope they will join sometime soon,” he said.