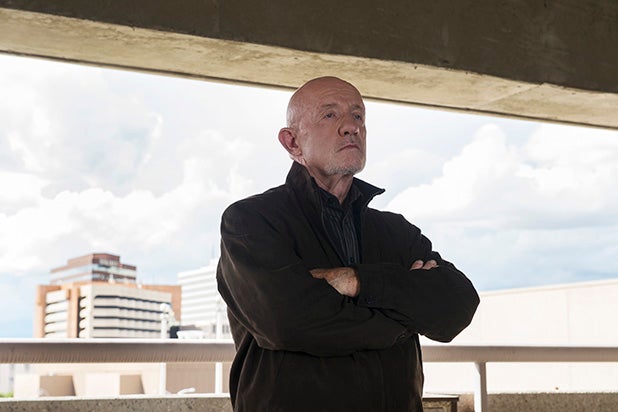 (Spoiler alert: Do not read this story if you have yet to watch Monday’s Episodes 203 of “Better Call Saul.”)

Better call an ambulance, because “Better Call Saul’s” Jonathan Banks is about to take Mike Ehrmantraut to “some very violent places,” the actor tells TheWrap.

Monday’s “Better Call Saul” closed on a dangerous cliffhanger, the makings of a possible alliance that could turn the extended Jimmy McGill universe upside-down. In need of some funds — and maybe even a little action — Ehrmantraut has been recruited by Nacho Varga (Michael Mando) to make “a guy” go away.

There’s a few things we don’t know at the moment: 1. Does Mike accept the gig? and 2. Who’s the poor sucker?

It’s fun to guess No. 2: Could it be Nacho’s cousin Tuco Salamanca (Raymond Cruz)? We know that the violent cartel leader lives to see “Breaking Bad,” but perhaps Varga’s been caught doing a bit too much freelance work.

Might he instead been scheming to off McGill? They’ve had a few run-ins, but we know the future Saul Goodman will live to see a Cinnabon backroom. At the moment, your guess is as good as ours, and we’d love to read them in the comments section.

Our first question above we think can best be answered by Banks’ own brief summation for the rest of Mike’s Season 2: “One word: violence.”

Banks told TheWrap that his character will soon be forced to make “some really harsh decisions.” You know, sort of like killing a guy for Nacho in order to fulfill a contract with a shady veterinarian.

Mike is presented as a good guy who was once a dirty cop — a man with a strange but mostly true moral compass. His son was killed for the sins of crooked police officers, and now Mike is searching for a means to help his daughter-in-law and granddaughter stay afloat.

Since Ehrmantraut’s day job is collecting parking validation at a courthouse, we’d say contract killing money is a good place to start satisfying one of those dilemmas. Right now, between Episodes 203 and 204, Mike is thinking about the same thing.

In fact, Banks wants to leave the tollbooth behind even more than his on-screen persona.

There is, however, one perk to Ehrmantraut’s crummy job that Banks enjoys: shade. Filming in Albequerqe, New Mexico, it’s gets about as hot as you’ve ever been, he revealed. That parking lot booth is out of the sun and under a bridge — so locations for long days could be much worse, Banks admitted.

Still, like Mike, the actor is looking for more action, telling us: “I better damn well get out of there pretty soon or I’m gonna go nuts!”

Finally, came the question you have to ask in a “Better Call Saul” interview — what Banks thinks about a potential Walter White (Bryan Cranston) and/or Jesse Pinkman (Aaron Paul) cameo. Banks is happy to please the audience, but he had a caveat if the casting comes to fruition.

“When actors think they’re cuter than the material, I just want to gag,” Banks concluded.